Three-cornered leek, pretty now, eyesore later. Heather Hacking — Enterprise-Record
Yes, I have a “Most Dreaded” weed list, and right now most of those weeds are in bloom. 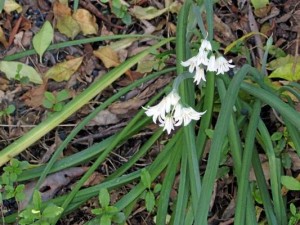 It’s early spring and weeds are like that. They bloom early and they bloom when you’re not looking. They throw out their seeds when you’re still wearing sweaters and before you’ve had time to find your garden spade in the shed.

In fact, if this was a normal year, it might still be raining. We’d be indoors daydreaming about wasting water, while weeds grew and flowered.

Studies still need to be done, yet I hypothesize that weeds may be biologically attuned to the sound of our car engines. When weeds sense our cars have pulled out of the driveway, especially for a long trip, they quickly flower and seeds are strewn. 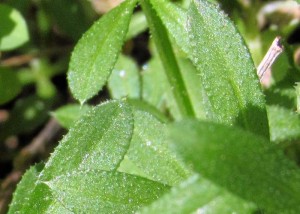 Some people spend a lot of money on the right weed killer for the right type of weed, but it’s much easier to simply yank the weeds before they produce seeds. 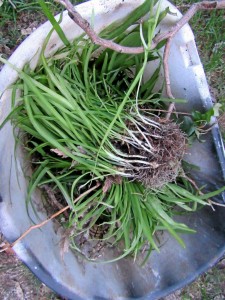 I know, I know. Some weeds send out underground shoots or have bulbs and require digging.

Digging can be considered a form of exercise and exercise is recommended by doctors.

I never put weeds in my compost pile, but use the green waste container so any potential seeds are someone else’s problem.

Even starting early and looking often, weeds can be tricky.

They literally hide under other plants. The flowers are sometimes so small they can easily be mistaken for a dab of lint. Some of the flowers are even green.

Other weeds have pretty flowers, which can trick a gardener into keeping them around. I learned the hard way with wild garlic, also known as three-cornered leek. The flowers are delightful right now, and look a bit like Lily of the Valley, only totally different.

This plant reproduces by bulb and by seed. The main plant dies right after flowering and leaves a brown spot for the next 10 months.

The best advice is to have yanked this plant two months ago. If you want some delicate, pretty blooms, buy some cut flowers at Trader Joe’s.

As much as I dislike three-cornered leak, the plant I hate the most is the one I call “velcro weed.” This plant is sticky and grabs onto the bottom of your shoes, your socks, the hairs on your legs.

The plant also fights back: If I yank a bunch of this weed without gloves, I end up with welts up and down my forearms.

Look closely, because the plant is blooming now. The flowers are green — tiny and green.

The University of California calls this weed “catchweed bedstraw.” Apparently, people would shove the plants into a sack to make mattress. Likely the plant is found everywhere because seeds traveled in people’s hair. 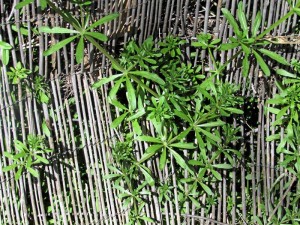 One good thing about this plant being clingy is that it is pulled up easily. If you use a hoe, you can do a circular motion and most of the plants will stick to one another in to a big, weedy mess. The plant also has a single taproot, which is a cinch to yank.

My problem is that my neighbor Bob has a formidable mound of velcro plant growing on the other side of a locked fence. The plant is literally sticking its flowering head over into my yard.

Perhaps I’ll hop the fence one night and fix the problem for both of us.

Another common weed in my yard, in the cracks in the ally and in soil in strip malls everywhere, is a weed called groundsel, http://goo.gl/JxIaen. This plant grows over the winter, and flowers right about now. The blooms are yellow and are pretty for about 10 minutes, before turning into a cotton-like wad of seeds.

It’s pretty easy to yank these out of the ground before they flower.

Some weeds I do enjoy, if only for nostalgic reasons. 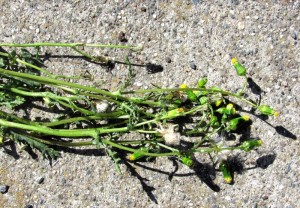 I’m fairly partial to Bermuda buttercup, the yellow member of the oxalis family.

I grew up calling this plant “sour grass.” If you chew on the succulent stems (but don’t swallow) the taste is sour, http://goo.gl/nbEIPH

This entry was posted in Uncategorized and tagged velcro, weeds. Bookmark the permalink.