As a kid I wanted to have a puppy dog but my mom said: “You’re not old enough to take care of a dog and that means its more work for me.”

So my mom asked my older brothers to take me to the pet store and find me something that’s less work to take care of than a puppy dog would be.

My three older brothers drove me to the pet store and had me look around at all the pets. The place smelled pretty bad but it was fascinating. There were dogs and cats and birds all over the place. I asked if the storeowner had any monkeys.

I took a look in the reptile and I was mesmerized by all the creatures crawling around and staring back at me.

“Find anything you like?” The pet storeowner came over and asked me after a few minutes.

“You do, huh? Well, we have some nice ones here but you know, your snake needs to eat too, you know.” the pet store owner informed me.

“Yes, rodents – like rats and mice. I’ll sell you some of those too.”

So with a gofer snake all coiled up in a gunny sack on my lap we drove back home from the pet store.

There was also a shoe box on the floor next to me with 2 white rats for my snake to eat. They were not so little but they were cute things, with white fir, wiggly noses with whiskers, pink eyes and bony, little white human-like hands with sharp claw-like nails on them. And they had large testicles that dragged on the ground underneath their long naked tails as they ran around. Cute as hell.

“How do you play with rats and snakes?” my mom asked me with her mouth open when we got back home.

My mom just looked at me and my pets with her eyes wide and said nothing.

“I haven’t really named the rats yet.” I said as I tried to hand them to her.

“No. No. No. You hold them fine.” My mom quickly answers back with a look of revulsion on her face.

“Where will they… Where will Slinky and the rats stay?” my mom asked in distress.

The front porch outside became Slinky’s new home in a 2 foot by 3-foot metal box that my dad got from the garage. We put a couple inches of dirt on the bottom and a window screen covering the top opening with a brick on top of that.

We put the rats in an old birdcage I found in the back alley. I stuffed cardboard and newspapers in their cage and they chewed it all up and filled it with urine and little hard, black, oval shaped, rat turds into a nice nest.

I’d look at Slinky daily whenever I remembered to and I’d pick him up and he’d wrap himself all around my body and cling to me and hold me tight. I guess I thought it was sort of like a secret love affair we had with each other.

It was fun to watch the neighborhood girls scream and run whenever I’d come over to them with Slinky warped all around my arms and my neck and I’d ask if the girls wanted to hold him with a crafty smile on my face.

But Slinky wouldn’t eat the white rats that I also had to keep on the front porch next to him. I guess the rats might have been a little bit too big for the snake to eat. He managed to survive for weeks on just water in the dark metal box with dried up mud and rocks on the floor of his home.

“Look, Phil, there’s a rat’s nest in the empty lot behind the alley. Catch the baby rats and your snake can eat them since those big, fat white rats are too big for your snake to eat and you seem to like the rats more than you like the snake anyway.” my dad says.

“Ahhh…Are you sure it’s safe… for me to pick up wild rats, Dad?”

“Yeah, yeah, it’s safe. Go ahead and get them and put them into this box.”

So several tiny, finger sized, brown rats are carefully picked up by their tails – with my fingers – as their big, angry mother rat made threatening aggressive motions and sounds from a few feet away.

Slinky ate at long last once he caught the small rats in the front porch courtyard.

He coiled up the small, brown rats, squeezed them until they stopped moving and then he swallowed them whole. It was an amazing sight. All the neighborhood kids would come by to watch and hoop and holler as Slinky lunged at and caught the rats and he opened his mouth wide and he swallowed them in one big slow swallow. You could see the bulge go all the way down his body to his middle and just sort of stay there for a couple days.

The day after Slinky had his first meal in weeks, he also had his first bowel movement in weeks and he drank a lot of water. He seemed happier after he ate. He moved around more. A few days after I ran out of baby rats for Slinky to eat, he manifested enough energy to escape the cold, dark 2′ x 3′ metal box by slipping under the window screen 3 feet high and he escaped out of the metal box. I found out when a neighbor kid came running, “Phil, Phil, your snake got out! You’re snake got out! He’s in the street! A car ran him over and I think he’s dead. You better go get him!”

I had to bury Slinky in my dad’s garden in the back yard.  He helped to grow my dad’s cherry tomatoes for many years after that.

I’m sorry Slinky.  I really liked you a lot. I guess I just didn’t realize that my job was to help free you up into the hills where you could catch all the small rodents you’d ever want to eat.  Maybe next time.

I liked those white rats too though. I would let them run loose on the front porch out of their old metal bird and they liked to crawl up on me into my clothes and pockets and down my neck. They were actually very nice loving creatures.

One rat was a little more particular about what he ate than the other rat was. He was skinny. So I called him Skinny. But the other rat was quite a bit fatter. So I called him Fatty. Skinny and Fatty would pretty much eat any leftover table scraps I gave them but what Fatty really liked and loved to eat as much as he could were the big cockroaches I’d catch and give him.

Fatty would grab hold of the cockroaches I’d hand him and he’d take them with his little hands, hold them tight and chomp away on them with their feet wiggling around. You could hear their hard shells crunching as Fatty ate them with a lot of enthusiasm. He’d eat off their heads first and then he’d happily finish them off, licking his hands clean.

Skinny seemed to just sort of watch in disgust. Fatty would run and climb up on me and go into my pockets looking for more cockroaches. I caught all the cockroaches I could catch for him that were running on the kitchen floor when I’d turn on the light late at night. They’d be scurrying about and tying to get away but I’d usually be able to catch one of two of them for Fatty.

I would just leave the door to the cage open so that Skinny and Fatty could run loose if they wanted to – but they seemed happy to just always stay all covered up in their cage. At least they did in the daytime. I don’t really know what they did at night.

Sometimes for fun, I’d take Skinny and Fatty down the block and put them on the ground to see what they’d do. They’d sniff around a little bit and then they’d find their way back home and get back into their cage where they were happy. So they must have gotten out of their cage at night but they always came back.

Slinky wanted freedom. The rats did not.

Put them in a box and they want to be free.

Or set them free

and they want to be 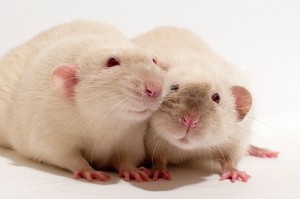 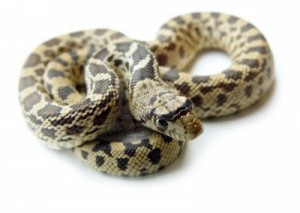