The streets of Saigon are busy, dusty and noisy.

GI’s driving vehicles of all sizes and in convoys loaded with equipment are all in a hurry. Horns are blowing and arms are waving frantically at pedestrians scampering across the street.

Everything is written in strange Asian lettering. Bicycles, mopeds, peddle-driven and small engine scooters run between the military vehicles as they stop for red lights.

By the time the light turns green, there is no single lane, only a massive jumble of many different vehicles, pushing and shoving and squeezing in and spewing out exhaust and noise.

Some mopeds are driven by pretty and nicely dressed young girls and others by men smoking cigarettes and wearing army clothes and thong sandals.

Some tinny motorized bikes have two, three or more people on them. Anywhere there is room for somebody there is a person riding there; on gas tanks, on handle bars, on rear racks, on headlights, on fenders, on each other’s laps and even on peddles standing up.

We fly through the streets that seem to have no rhyme or reason. They don’t go in any recognizable 90 degree angles. They go in all directions and seem to cross randomly. The names all looked alike. I’m lost immediately.

“How do you know where you’re going, or do you?” I take a chance and ask Specialist Chavez, the jeep’s driver. Chavez is a tall, thin, good-looking Latino from East LA. He grins, laughs and says, “Took me a while before I knew how to get around. Got lost a lot and still do whenever I go off the main streets. You have to watch it anyway. Get lost in the wrong neighborhood in Saigon and you can disappear for good”

Chavez is speeding through the streets like he’s driving a race car, blowing the horn and yelling at anyone who even thinks about getting in the way. We turn hard rights and lefts, the wheels are squealing and I have to hold on to keep from flying out of the jeep.

“You stay in Saigon?” I asked, looking at the people he’s almost running over and then looking back at Chavez.
Chavez grins, lights a cigarette, offers me one and says, “I stay in Saigon now. I’ve been up North too. It’s better country up there but more dangerous. Saigon has something to do at night. Up north, you might just be stomping the boonies. Okay if you like that sort of thing. I prefer this.” He says as he blows the horn at a pretty Vietnamese girl and yells, “Hi there, pretty mamasan.” He laughs, winks at me and laughs some more.

We approach a roadblock, Chavez waves at a guard and we head into the “off limits” section of Saigon.

“Off limits?! Why’s it off limits?” I ask.
“It’s off limits because we ain’t supposed to be here. It ain’t really safe. This part of Saigon belongs to the Viet Cong at night. Keep inside at night.”
“Inside where?” I ask.
“Inside anywhere. Don’t even look out the windows. VC own this part of town after dark. And always carry your weapon.”
“Weapon? What weapon?
“You don’t have a weapon? Well, here, take this.” Chavez says as he hands me a fully loaded 9MM pistol. “Keep this with you at all times.”

We pull up to a building and Chavez says: “Go on in there and find a place to sack out.”

“But…but… what is this place?” I stutter.
“It’s the only place available for you right now. I’ll try and come back tonight to take you to chow otherwise I’ll be back tomorrow.”

Chavez speeds off and I think to myself, a year in Vietnam might be a very long time. 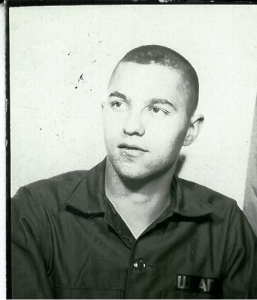