They say it’s not too late to get a flu shot. I can’t think of anybody who likes to get a shot. I mean, have someone stick a needle deep into your arm or somewhere else? Come on!

When I got back from Vietnam, where I was a medic, I still had another 6 months to do in the army until my time was up so after my 30 day leave I was sent to Fort Benning, Georgia, home of the Army Airborne Ranger School.

One of the things I had to do was to give shots to families of the troopers at Fort Benning. That included giving shots to little kids just getting ready to attend school for the first time, so most of the kids were unhappy little 5 year olds.

Hundreds of them were lined up with their mothers for hundreds of feet going way down the hallway and out the door and down the block. The kids were not happy about being there and they were crying and their crying got louder and louder as they got closer and closer to me who had to give the kids shots and some of the kids needed more than one shot.

I did that all day long for a couple of weeks. It was better than being in Vietnam but not much better. I actually think giving shots to hundreds of kids is worse than being on the receiving end of getting the shots. I had to do it but I got to give the kids some candy afterwords. There was a huge bowl of candy and I told the kids to grab a handful, which usually put a smile on their faces — but not always. Sometimes they took the candy and stuck their tongue out at me.

One of the most memorable incidents was a mother who came with her 3 children who all needed shots including her. Actually she needed to get a TB test too.

“Which arm do you want the TB test in?” I asked.

“Does it matter?” she asked.

“Well, this does leave a little scar.” I answered.

“Sure, wherever you want it. I can even put in on your back.”

The lady  looked at me, smiled and lifted her dress up all the way said, “Put it here.” as she pointed to her upper thigh. That was slightly uncomfortable but I put it where she wanted it. She smiled at me and then her girlfriend who came with her and her 2 kids lifted up her dress and asked me to do the same thing.

“Well, this ain’t so bad.” I chuckled to myself with a smile.

Anyway, as much as I hate to digress, speaking of the army, a couple of years ago I got a flu shot for the first time in my life because they offered it to me for free at the VA clinic. I mean I read that the flu kills thousands of people a year and once you’re over 50 you ought to get the shot so what the hell, besides being stuck with a needle, why not get the shot? Not that I like needles but why not do the right thing?

But last year the VA didn’t offer the shots and so I didn’t bother to get one.

I figured I haven’t gotten the flu in quite a few years and how bad could the flu be anyway? And who wants to go out of their way to get stuck with a needle, right?

So guess what? Yeah, I got the flu.

Which laid me up pretty good and kept me from doing just about everything including doing my weekly radio show on KZFR.

1)      Weak and tired and dizzy as hell for days. I mean like I could hardly get out of bed to drag myself to the bathroom, which I felt like I had to every five minutes. That alone was exhausting.

2)      I had the mother of all headaches. I mean it felt like my head was going to explode and I wished it would already just to get it over with.

3)      I had very clogged nasal passages (stuffy nose and ear canals). It felt like my head was full of rocks – which I may have been accused of before this.

4)      I was sneezing non stop and my nose wouldn’t stop running. Like a faucet.

5)      I was coughing so much it hurt the back of my neck and side of my chest. I hated feeling a cough or sneeze coming on because I was afraid my head was gonna fly off.

7)      I couldn’t sleep for very long periods. I mean I was doing some serious tossing and turning.

8)      My body ached and I had pains and sore muscles all over. Even my jaw and my teeth seemed to be hurting.

Moral of this story? I guess people do get the flu after all — and next time a flu shot is offered, I’m getting one. I may even go out of my way to get one.

Hell, I might even get two shots just to be sure I don’t have to go through this again any time soon. 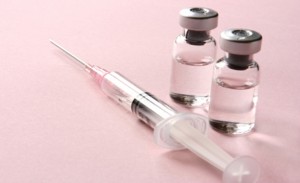