The Tet Offensive and Syria

During the last part of January 1967 and the first part of February, 1968, during the time I was in Vietnam (from June 1966 to June 1967) there was a lot of talk among the troops about “maybe the US was not winning the war after all like we’ve been told” because suddenly North Vietnam was doing some very serious fighting during Tet, which is the Vietnamese New Year.

But nobody talks about what I call the “First Tet Offensive” of 1967. My friends said, “This is nothing. Wait until next year. It’ll be much worse.”

What you do hear about is ”The Tet Offensive” that was a military campaign conducted between January 30 and September 23, 1968, by forces of the Viet Cong, or National Front for the Liberation of South Vietnam, and the North Vietnamese army against the forces of South Vietnam, the US, and their allies during the Vietnam War. The purpose of the offensive was to strike military and civilian command and control centers throughout South Vietnam and to spark a general uprising among the population that would then topple the Saigon government, thus ending the war in a single blow.

It’s called The Tet Offensive because it began during the early morning hours of January 31st, the day of the most important Vietnamese holiday, Tet, which celebrates the first day of the year on a traditional lunar calendar. Both North and South Vietnam announced on national radio broadcasts that there would be a two-day cease-fire in honor of Tet, also called “Spring Festival.” In Vietnamese, the offensive is officially called “The General Offensive and Uprising 1968″.

The Vietcong launched a major offensive beginning with a wave of attacks on the morning of  January 30th in the northern part of South Vietnam. This early attack did not, however, cause undue alarm or lead to widespread allied defensive measures.

When the main communist operation began the next morning, the offensive was countrywide in scope and well coordinated, with more than 80,000 Vietcong troops striking more than 100 towns and cities, including 36 of 44 provincial capitals, five of the six autonomous cities, 72 of 245 district towns, and the national capital. The offensive was the largest military operation yet conducted by either side up to that point in the war.

The initial Vietcong attacks stunned allied forces and took them by surprise, but most were quickly contained and beaten back, inflicting massive casualties on N Vietnam. The exceptions were the fighting that erupted in the old imperial capital of Hue, where intense fighting lasted for a month, and the continuing struggle around the U.S. combat base at Khe Sanh, where fighting continued for two more months.

Although the offensive was a military disaster for Vietcong forces, it had a profound effect on the American administration and shocked the American public, which had been led to believe by its political and military leaders that the communists were, due to previous defeats, incapable of launching such a massive effort.

The majority of Western historians have concluded that the offensive ended in June 1968 but the effects it had was to greatly alter the American commitment to the war enough so that anti-war protests became much more intense and much more frequent and even though US forces did not leave Vietnam until 1973, the war was pretty much over and lost after The 1968 Tet Offensive.

I’m reminded of the huge public outpouring of anti-war sentiment all across the country after The Tet Offensive to stop the war in Vietnam by what’s been happening today with the “No War With Syria” protests, not just by Congress but by (or maybe because of) all the public opposition to not bomb Syria happening all across America and much of the rest of the world.

The US lost the war in Vietnam because after 10 years of fighting with nothing to show for it, the public had had enough of it.

Today North and South Vietnam are reunited and it is pretty much a capitalist country. So who won and who lost the war and did it really make a difference to anyone who was not involved or personally affected by it? Anyone, that is, besides the 58,000 plus US troops who were killed there and the 100’s of thousands who were wounded both physically and psychologically — and their families who suffered because of it. Not to mention who knows how many 100’s of thousands of Vietnamese, both north and south that suffered even a worse fate.

And what will happen to Syria if it does not give up it’s chemical weapons?

Well, it looks like we’re going to see if anything happens. 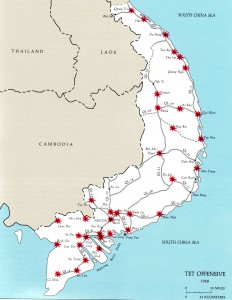 Major battles in Vietnam during The Tet Offensive, 1968