I’ve had a friend for the past couple of years that I like quite a bit. We became good buddies and we’d visit each other regularly and talk about world events and relationships and whatever else came up. I mean I thought we could communicate with each other very well.

A couple months ago I noticed he was loosing weight. I mentioned it to him and he said his divorce was hurting him pretty badly. I said I was sorry to hear that.

As the weeks went by I noticed his clothes were hanging on him pretty badly and I said, “What’s up with weight loss?”

“Oh, you know, this divorce is just killing me. I love the lady but she’s making things pretty rough on me. We’re just fighting all the time and I had to move out of the house the other day so you know; I’m not eating much and not sleeping at all.”

I recommended a shrink for him to see he started seeing the shrink and he said that was going well but the weight was still coming off.

“Hey, man, you’re disappearing! What’s going on? You look like you’re melting away right before my eyes!”

“Yeah, you know, this divorce is just killing me.”

Every time I saw him he looked skinnier and skinnier but I guess I thought it was just depression and his not eating due to his “divorce diet” but today I found out through a mutual friend that he was busted for a DUI. He lost his job and his marriage and his house and everything else. I asked the mutual friend what happened. He shook his head and all he said was, “Meth.”

Suddenly it all made sense. I guess I thought he was too smart to mess around with something like that. I realize that intelligence doesn’t have a lot to do with addiction — but meth? Come on! I mean, I’ve known some alcoholics and some drug abusers who messed around with pot and pills (legal and illegal) and some snorted coke but messing around with a nasty killer like meth?! I was flabbergasted. All day long today I’ve been walking around and shaking my head in disbelief.

This is not the first person I’ve known who’ve messed up their life with meth. I had another friend who lost everything to it as well, including his teeth. He had a good job that paid $80,000.00 a year and he owned a house and a Harley-Davidson, he was married and had 2 kids and the last thing I heard was it was all gone, including 80 pounds of his weight and he wasn’t really heavy to begin with.

I mean losing any one of those things ought to be enough to have someone stop messing up and destroying their lives and hurting the people they love but I guess it’s not enough for some people.

I have another friend who was very  intelligent and educated but who insisted with all sincerity that the police were following him, parking across the street from him and were hiding in his attic. I mean he really believed it. He also said that the guy across the street from him was using a ray gun to shoot holes into his body. He put aluminum foil up on his windows to shield the ray gun from shooting him. He pointed to a tiny, practically invisible spot on his arm and said, “See! That’s where he shot me last night!” All I could say was, “I’m sorry but I don’t see anything.” as I looked at what might have been a tiny freckle or some other very slight blemish.

Oh, yes, I just remembered, I also had a shrink (I’ve had a few) who I admired very much and who I looked up to as a role model who I read about in the paper getting busted for smoking meth on the campus where he taught school. Talk about a fall from grace. I mean, he not only lost his job teaching but also his license to be a shrink.

So who would mess around with meth? Well, the 4 people I mentioned above would and there are a lot of other people who you can read about messing up their lives in the paper every day getting busted for doing and saying crazy (paranoid) things and losing everything from messing around with meth. I guess some people think they can be the one person who can mess with meth and not have a problem.

My message to whoever is looking for the thrill of trying meth? Sure, go ahead and try it if you’re crazy enough to want to bet against the odds of being another statistic to the people mentioned above and who you read about in the paper who are getting busted and losing not just weight and their teeth but everything else that has ever had any importance in their lives, including their freedom and their life. 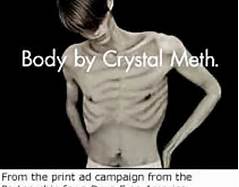