People keep asking why these mass shootings keep happening all over the country? These are the questions that come to my mind:

How can one of the richest countries in the world justify 50 million of its citizens not being able to afford health care when every other civilized country and some not so civilized countries in the world has affordable health care? How do we justify millions of people losing their homes while the banks that caused the problem in the first place are bailed out? How do we justify cutting taxes for the rich while we cut services for the poor and the middle class?

Or course people are angry when they feel that they’re being ripped off. And why do they feel that way? Because they see insurance companies making billions of dollars a year shuffling paperwork by just sending the money that we citizens send them to to pay health care providers? But who needs them? Cut out the middleman. How hard can it be to eliminate the insurance companies and put together a computer program to pay our medical bills?

I mean if we can send a rover to Mars that does scientific experiments and sends back data and pictures to Earth, not to mention the Jupiter Explorer that has traveled several billion miles and still is sending back data and has just left our Solar System, we ought to be able to put together a computer program that sends our money to health care providers without the insurance companies raking in billions of dollars in the process. Right there, we’d save billions of dollars a year.

And then I remember that our society is not based upon cooperation. Unless you consider the insurance industry and the oil companies and the bank lobbyist “contributing” to Congress with millions of dollars a year to vote the way they benefit the most which almost always is not the way the public benefits is cooperation.

And then you can see why people are angry and afraid (and some dangerous) because they see they are not going to get what they want and need even though there really is plenty of what we all need to go around but evidently that’s not enough for some people and corporations, they want it all and that has led to the 400 richest families having more money than half the rest of the country has.

That leaves hundreds of millions of people scrabbling and feeling like they’re not getting their fair share and a lot of those people are frustrated and don’t know what to do but they are angry about it.

So some of them do some pretty dumb things like listen to like Rush Limbaugh and Ann Coulter and Bill O’Reilly, Michael Savage, Sean Hannity and the other hate mongers on Fox News who convince them that it’s not that the economic system is unfair,  no, it’s government that is the problem. And they rile some people up enough to do some pretty stupid things like voting against their own self-interests in elections.

The hate mongers rile up some people to believe that the problem is the liberals and the environmentalist and the immigrants and women having the right to choose to have an abortion and gays and gays having the right to marry. That must be the problem. They somehow fool people into believing that if only more money went to the rich, that would solve the problem. Yes, let’s cut welfare (for the poor, not for the rich corporations) and let’s cut education and let’s cut government regulations and environmental protection that might have prevented the huge Gulf Coast oil spill and the Wall Street collapse and the Banks from going broke.

They think, yeah, that’s the answer! Give billions of dollars to the banks and give tax breaks and subsidies to the oil companies and to corporations and to the rich and the hell with the middle class and the poor. They don’t deserve it. Let’s break up the unions. Yeah, that’s the answer. Let’s bust the unions!

People get angry when they hear that their Social Security and Medicare that they worked hard for all their lives might not be there for them when they need it. How do we justify big business controlling Congress and watch them destroying our atmosphere and our environment for their personal gain while they’re doing it? How do we justify cutting education funding for our children while big business cheers on unbridled corporate profits? Which, incidentally are higher than ever.

What’s all this got to do with the shootings that seem to be happening all the time now? Like I said, our society is based upon selfishness and not about cooperation and caring about the things that I just mentioned. But people feel cheated and a lot of them feel left out.

Most people seem to be able to somehow or other overlook it but not everybody can. It takes a lot of dexterity to survive in today’s society and some people don’t have the capability to do it very well and they’re frustrated and some have become self destructive alcoholics and some become addicted to drugs and some, cheat and lie and gamble and commit crime and become angry and become racist and sexist and have road rage and mental health issues.

Oh, by the way, there just happens to be millions of guns and assault rifles (that are really weapons of war) laying around and some people are filled with enough hate and anger, fueled on by the hate mongers telling them it’s other people’s fault, that they use those weapons on innocent people. Suddenly someone with an assault rifle has some power and they want to use it and they don’t care who they hurt. And they must know that they’re probably going to be one of the dead.

Like I said, our society is not based upon cooperation. It’s based upon selfishness and I believe the mass shootings are the ultimate act of selfishness.

And where to hurt society the most? By shooting innocent people and going to our schools and shooting and killing what we love and value the most, helpless little children.

So how do we fix this problem? We’ve got to use our heads more and not listen to the hate mongers who tell us that people like Rush Limbaugh, who makes 50 million dollars a year by spreading hate and intolerance, is just good business for the Fox Network — and that cutting his taxes — and cutting your Social Security and your Medicare is the answer to our problems.

I think it’s just the other way around. We need to cut Rush Limbaugh’s hate filled mouth and keep Social security, Medicare and education strong because millions of people need it.

I remember my parents saying, it’s a dog eat dog world out there but here it is fall and soon we’ll be getting close to the holidays and isn’t cooperation and caring about something besides ourselves what Christmas — and all other religions holidays claim to be all about?

Or is that only for certain times of year — Except in Connecticut and Colorado and Washington DC and where every other mass shooting has occurred of course. Then it’s open season for anybody. 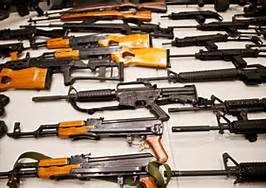 There are millions of these assault rifles all over the country and they are in every neighborhood in every city and in every town and they come with large capacity ammo clips and they can be bought with very little, if any background checks by just about anybody.

It might not be the most sensible thing in the world but, hey, it’s good for business and I guess that must be the most the most important thing because that’s what’s been happening and it’s what we’re continuing to let happen.