We lived in East LA.

My car was a custom copper colored, lowered to the ground, tuck and rolled, four door, 1950 Chevy. It was a very cherry ride with loud dual glass packed mufflers.

It was the year before I was with Marissa Mendoza for 5 years and had a baby with.

It was a couple years before Eddie and I were sent to Vietnam.

It was before Interstate 5 was finished so we drove all the way to the Mexican border on the old Ball Road Highway to get to the Mexican border town of Tijuana. It seemed to take forever to get there even though it was only 100 miles from LA. And then we continued on another hour or so into Mexico.

I remember Eddie’s mom and dad and little sister Diana and of course, the best friend I ever had, Eddie, in the car with me.

Eddie and I sat in the back seat with his sister Diana who was 12 years old. A  younger boy named Junior was also with us. Eddie’s parents, Ester and Alex, sat in the front seat of Alex’s dark blue, 1951 Chevy with Alex’s friend, Trinity, who everybody called Trini. Junior was Trini’s son. Alex and Trini were happy and laughing and singing and trying to get me to speak Spanish. Trini kept saying: “Mucho Frio, que no, Senor Felipe?” and I nodded my head and pretended I knew what he was saying. Finally, after a couple hours Trini speaking Spanish to me he finally said, “It’s very cold, que no, Senor Felipe.” I felt a little better because I finally got it.

Alex and Trini called each other “compa” which took me another day or two to figure out was short for compadre, as they also were obviously long time best friends. It was a happy occasion as we were all going down to Rosarito Beach, Mexico to vacation for seven full days.

The beach was unspoiled at the time and the waves were big, powerful and loud.

Eddie and I played on the beach throwing cherry bombs at each other and throwing them into the ocean waves and watching them explode. They were much quieter than we expected them to be because of the wide open space and even though they hit the water their fuses kept on burning and we could still see the flash from the explosion beneath the waves.

We ate burritos from vendors on the beach that cost 25 cents and tasted delicious.

I bought a pair of bongos to put them on the back shelf of my ’50 Chevy when we got back to LA. Oh, man, the car was going to look even more cherry than before.

We ate dinner at a nice restaurant called Ignacio’s who everybody called Nacho’s. I remember Eddie’s mother telling Eddie and me to use our knife and fork and to stop using our fingers to eat the chicken on our plates. We were afraid the chicken would wind up on the floor so we ate real slowly because it kept sliding around on our plates.

It all felt so foreign and distant from home even though it was really maybe only a few miles south of the US border but at the time it couldn’t have felt more extraterrestrial. I sent my mom and dad a post card with the address and included, “Planet Earth, The Universe” because it felt like we were a million miles away.

I remember Eddie and me going up to Tijuana to shop and look around. We walked along the main drag as men in front of the bars tried to coax us to go inside the bars along the street. We shook our heads and said “No, gracias, senor.” until we got to this one bar called Rodrigo’s and the guy practically shoved us inside as he said: “Hey, it don’t cost anything to go inside and take a look. There’s some nice chavalitas in there, vatos. Orale pues.”

It was dark and smoky inside with two old men sitting around a little table drinking beer.

We sat down and didn’t know what to do. A waiter came over and said something to us in Spanish. Eddie and I looked at each other and both said “Dos XX” and we were both surprised that at our young age we were served with no hesitation whatsoever. All we had to do was say “Dos XX, por favor.” And “Ten pesos.” is all the waiter said until he came back and asked us in Spanish if we wanted another round. We nodded our heads as we wondered how much ten pesos was in US dollars. All I had was maybe five dollars or so in my pocket and I wasn’t sure that was going to be enough but that didn’t stop us from nodding our heads again when the waiter asked us if we wanted another round.

After the third round two girls who were probably in their 20’s or early 30’s came up to us and asked us in broken English if we wanted some company. “They don’t look too bad.” I said to Eddie. Eddie nodded his head and said: “No, they look pretty good.” and the girls sat down next to us and put their arms around us.

“Oh, man, you got the pretty one.” Eddie said to me. By that time I was too drunk to even notice. Hell, they both looked pretty good to me. The one with me had flame red hair ratted up high and black dangling earrings hanging down to her shoulders. To me she smelled like a supernatural being. Eddie’s girl had had bright red earrings and long, curly black hair that went past her bare shoulders and halfway down her back and onto Eddie’s bare arms. Both girls had had eyeliner that made their eyes look like some kind of goddesses.

“What’s your name?” I asked the girl sitting next to me.

“Dorellia.” She whispered into my ear. She didn’t even ask my name. She just said: “You want go up to the room with me?” as she nodded her head toward the stairway to the second floor.

I looked over at Eddie and he asked me how much money I had. “Maybe five bucks.” I answered. “What you got?” I asked him.

“Maybe six.” Eddie answered then he looked at me and said “But we gotta pay for the beers.”

So we sat there drinking Dos XX with these sexy women who wanted to take us upstairs and take advantage of us but we couldn’t imagine they’d do anything other than laugh at us if we said all we had was eleven bucks between us before paying for the beers.

So we sat there, drinking beer and acted like we weren’t interested in taking the girls to bed and we pretended that we’d rather just sit there and drink Mexican beer.

After the girls sat there and nobody said anything for a couple more minutes, we ordered another beer when suddenly two other young guys walked into the bar and the girls got up and went over to them. A few minutes later we watched disheartened as the other guys got up and took the girls upstairs and Eddie and I looked at each other, nodded our heads, got up, put five dollars on the table and went out the door of Rodrigo’s.

When we got back to the street a guy approached us and asked and said, “Orale, vatos,  you wanna buy some marijuana?” Again Eddie and I acted nonchalant as if we weren’t really interested even though I couldn’t remember a stranger ever coming up to me and asking if I’d like to buy some pot.

“Too much. That’s what we pay back home.” I said as I looked away and acted disinterested.

I opened my arms as big as I could and said: “This big.” As we all laughed at the sight.

We went back to Rosarito shaking our heads because we weren’t smoking any pot and we didn’t get any lovin’.

Somehow or other I got myself an air mattress/raft and went out into the big waves that were at least 10 or 12 feet high and rode those waves back to shore fast and hard. Eddie thought I was crazy but I did it again and again and again for hours. I left my glasses on the shore and kept going out for more to show myself I wasn’t afraid or a chicken after all.

When we got back to East LA we heard that a friend of ours named Johnny Martinez drowned at the beach in Rosarito the same week I was riding those waves.

And so Eddie thought I was the one who was crazy and wild and yet it was Eddie who died 18 years later at the LA Country General Hospital from minor surgery due to a screw up with the respirator that was inserted improperly and Eddied died of asphyxiation.

But, of course being strung out on reds probably didn’t help Eddie any either as his system was probably distressed and suppressed and more easily shut down than it would have been otherwise.

And here I sit with Sweet Lady T at the airport in Puerto Vallarta, Mexico remembering those days and writing and reading and crying and missing the best friend I ever had as I sit next to the best lady I ever had and I watch people from all over the world going back home hopefully from one of the best vacations they ever had.

Of  a friend and

An adventure they had together

A long time ago

And in another world. 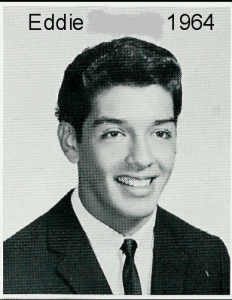 The best friend I ever had.