Parents usually try to teach their children to treat each other fairly and that’s a good thing but I was the youngest of four children, all boys. One of the first things I had to learn was that there were 3 older, bigger, stronger and faster kids than me in the household. So I learned it didn’t pay to try to fight them because I wasn’t going to win, especially when a parent wasn’t within earshot. And I think I remember hearing my dad say to my mom that I needed to learn to fend for myself.

I remember the older kids “teaching” me games that I thought was going to be fun but since I always seemed to have to lose, it may have been fun for them but it wasn’t so much fun for me.

I was always the little kid brother and I felt cheated because I rarely got anything new. Instead, I got hand-me-down clothes and discarded and usually worn out and/or broken toys. I didn’t really mind much because whatever my three brothers were playing with or were wearing, would usually sooner or later become mine. Toys were a little beat up and the clothes were usually a little worn and baggy but I didn’t have to worry about breaking or ruining anything that was new.

I was a lot smaller and younger than the older boys were, which made me the little kid who didn’t get to go with the big boys much but I guess in the end, it all equaled out because now that many years have passed, I’m still the youngest brother and suddenly it’s not as much fun to be one of the older ones. I’ve got more years left to do what I want to do and now, I may not be older than they are but I am bigger, stronger and faster.

Of course as we all got older our relationships changed. I grew up closest to the brother who was only 3 years older than me. We pretty much did everything together, shared the same room, had the same friends, went to the same school at the same time (until he was transferred to different school when I was in the 1st grade and he was in the 4th grade. That changed things for us).

My oldest brother (10 years older) and I have been very close. He was like a surrogate father to me and took me places and did things with me that my father didn’t have time to do. We’re still close today. My brother who is 8 years older than I am seemed to always be too busy to spend time with me. Once we got older and all moved out and found ourselves many hundreds of miles away from each other, we’d all get together a couple times a year for the holidays but that was pretty much it. Once our parents passed away we were lucky to see each other even that much.

Now that I have children of my own, I realize that siblings are going to fight and sometimes they’re going to feel that they’re being cheated and treated unfairly. I guess that gives them some life experience to be ready so that when they get out into the real world of work, relationships and bosses it won’t come quite as much of a shock when they feel that their bosses, colleagues and relationships are treating them unfairly.

At least for us younger siblings that might be the case. And the older ones? Well, they just might have to work at it a little bit harder.

They say time is a healer. I think that’s true. I also think time is a teacher and maybe that’s the same thing. 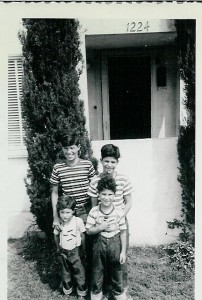 I’m the littlest one on the front left.