“So, ah, you hear anything from Marissa?” I asked my mom anxiously and she and my dad picked me up and were driving me home from LAX.

“Well, guess I’d better give her a call when we get home.” I said as I felt myself getting excited about seeing her again and thinking about making up for lost time in the bedroom.

As we drove home I could feel myself getting excited about being my home and getting back into the swing of things. My dad turned on the radio and the music sounded like sugar to my ears and damn if they weren’t playing the Byrds singing “Hey, Tambourine Man.”

Things looked the same and yet they looked different as we turned right at the intersection of Valley Blvd and Almansor Drive. I felt this sudden urge to run out of the car and jump into my sweet 57 Chevy and drive as fast as I could to see Marissa but I restrained myself.

As we drove up to the curb in front of the house I forced myself to get out of the car at a reasonable speed and carried my heavy duffle bags to the door and I felt the tears in my eyes as I breathed in the old, familiar yet somehow older, smaller and dirtier neighborhood than I remember since the last time I saw it. My heart was beating fast as I threw my bags on the porch and looked at the front door. My brother Richard opened the door, smiled at me and yelled: “Well, what the hell you know? Soldier Boy Phil’s home.”

I grabbed Richard and gave him a big hug. “How the hell you doing, Rich?”

“Yeah, I’m home. Man it’s good to be home.” I said as I looked around and set my bags on the living room floor. It felt surreal and dreamlike to actually be home and at the same time it felt anti climatic like I was expecting the place to look like fireworks were exploding or like I expected to feel like a kid riding the Matterhorn at Disneyland for the first time.

“Oh, yeah? Well, I’ll call her back in a minute.” I said as I tried to act like there was something else I’d rather do. Hell, I was ready to jump in my car and fly over there instantly but I thought I’d better wait a little while. I’ve done that too damned many times before only to find that she was out running around with Toni or chasing around doing who knows what.

“So, Phil, you gonna try and do something else while you’re home on leave or are you gonna just do the same old thing you’ve always done, chasing after Marissa?”

“Ah, well, I guess I still want to see Marissa (holding myself back from running over there immediately) but I don’t want to just waste time doing the same old thing again.”

“Good, maybe you can think about what you’re gonna do once you’re out of the army and going to school with the GI Bill.”

“Hey, Phil. It’s Marissa. She sounds kinda angry that you haven’t called her yet.” Richard said as he handed me the phone.

“How the hell god damned long you been there?”

“Oh, hi Marissa. Just walked in a minute ago.”

“You lying son of a beach! Tell the truth, when ya get there, last night?”

“Na, I just walked in the door. What you doing, chasing around with Toni?  Going out drinking and making trouble?”

“I’ve been here waiting for you to come over here and take good care of me.”

Just the thought of doing that got me excited. I looked around at my mom and my dad and Richard and said: “Yeah, I’ll get there pretty quick. Just give me a few minutes.”

With that my mom rolled her eyes and gave my dad a look of “here we go again.” And said: “Tell her to wait a little while. I want to make you something to eat.”

I nodded my head as I said to Marissa: “Give me a few minutes. I’ll be right over. I just got here.”

“I’ve been waiting for a year, you fool. Why the hell ain’t you here yet?”

I’ve been home five minutes and already I felt torn between all the people I missed like crazy for the past year but what felt like ten years — and suddenly now seemed like it’s only been ten minutes.

Mom heated up some chicken soup with matzo balls and served it up nice and hot. Man, it never tasted so good.

“Damned good, Ma, damned good soup. Boy, I sure missed your home cooking.” I said between gobbling it down and thinking of all the C rations I had to eat since the last time I ate my mom’s cooking.

“I’ve got the fridge full of your favorite food, Phil. Got corned beef and rye bread, cole slaw, potato salad, corn on the cob, salad with home made dressing and gonna make barley soup and cabbage soup, got lamb chops and T bone stake and baked potatoes. Gonna put a few pounds on you before you have to leave again.”

“Good. I can use a few more pounds.” I said as I tried to not make it so obvious that I was in a hurry to run over to Marissa’s.

I stalled as long as I could but as soon as I was done with my third bowl of soup and ate two handfuls of my mom’s homemade chocolate chip cookies I got up and said: “Well, I’d better get over there.”

“Okay, Phil, you held out for an hour, that’s pretty good.” My Mom sighed and I ran out the door and fired up my 57 Chevy and burned rubber down the road. 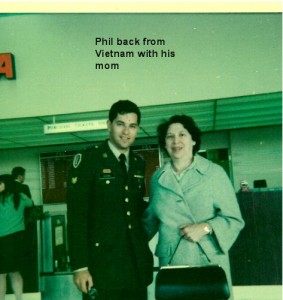