This lily by a different name doth not smell as sweet 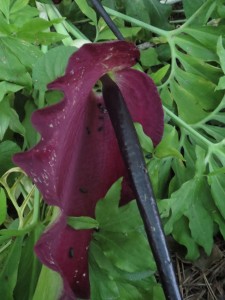 When someone writes you a letter and invites you to check out a plant that smell like a dead, rotting horse, of course you say yes.
Terry called a few weeks ago, her voice filled with anticipation.
Every year, about this time, the lilies bloom outside her living room window in Paradise.
The plants send up giant, deep burgundy flowers that looks much like an Easter lilly, only totally different than Easter lilies.
In the center is a deep purple (almost black) spadix. A spadix is the spike in the center of lily-like flowers.
She and her husband Leonard live on three acres. When this plant is really going strong, they can travel to the far end of their land and still get a whiff.
I’m wondering if plants that smell like rotting flesh are truly rare, or we just rarely encounter them because they were long-ago added to the compost pile?
The Chico State Herbarium, under the careful tutelage of Tim Divine, has a ginormous corpse flower I have had the pleasure of smelling. But that plant blooms so rarely, that when it does it is big news.
Terry’s flowers gross her out year-after-year. 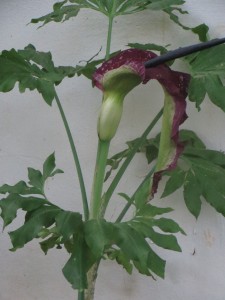 The stench is nature’s way of attracting flies, and other rotten-meat loving insects.
To the best of my ability, I will wager the plant is Dracunculus vulgaris, native to Crete and other pretty places in the Eastern Mediterranean.
For more than you would probably want to know: http://goo.gl/AB9MQ
Its also known as the Dragon arum, Voodoo lily, dragonwort or stinky lily.
Terry also calls it the Dead Horse lily, which seems perfectly acceptable. She learned this name from Anna Davis, who lived in the house next door for half a decade. Before her death late last year, Anna would visit the couple for garden chats and lily whiffing.
The Turners have lived with the annual smell for 22 years, and have had their chance to replace the plants with peonies. But they are a conversation piece, and somehow fit the place.
Often, gardening brings out the kid in us. When Terry and I talked on the phone, we joked about cutting the flowers open to see if there were dead bugs inside.
I was delighted to discover she had carefully placed newspaper on her outdoor table, so we could carve but not cause the dining area to reek like 14-day-old road kill.
A few bugs did crawl out after being freed by the knife. Info. on the Internet states the plant has a slippery center, and when the bugs enter, they are trapped for about a day. This gives the bugs time to do a pollination dance.
Alas, the plant is an acquired taste. Terry heard Mendon’s had a special collection of rare plants, and she offered to give them a Voodoo lily sample. But the popular nursery declined.
My search turned up a few outlets where the plants can be purchased as a gift — maybe for someone you don’t particularly like. 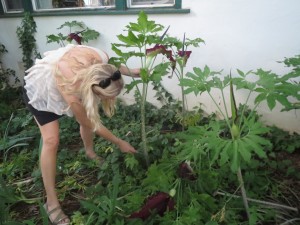 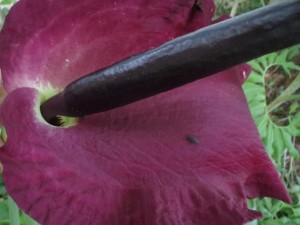