Trichocereus candicans gets to the point 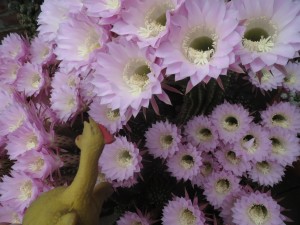 Life provides more adventure when you just say yes.
Recently a reader asked if I wanted to smell her dead horse lily.
Indeed.
The guys from Riparia asked to chat about summer vegetables, and would I stop by while shopping at the farmers market.
Yes siree Bruce.
A couple of weeks ago Suzi Draper called to say her cactus was about to bloom any day now.
Call me: I’ll be there.

For several days Suzi and I sent Facebook notes back and forth, the anticipation building.
I can sure use garden inspiration because my plot of earth is a great source of resentment.
Gopher.
I’m saving up for a really long rant about life, gophers and shattered expectations. But this week I had the opportunity to see and smell Trichocereus candicans, AKA Argentine giant.
Suzi bragged that she and her husband Richard had counted 133 buds on the plants.

Some people I know tend to exaggerate, so I didn’t particularly believe her.
But then a call came — this one more urgent — because she did not want me to miss a single bloom.
I didn’t count. But after seeing the sturdy, swollen buds packed onto the prickly, barrel-shaped plants, I can attest Suzi is no braggart.
I’m not sure if I enjoyed the plants more at the eve of their impending bloom, or the next morning when I was invited to sneak into her backyard and take photographs while she was at work. 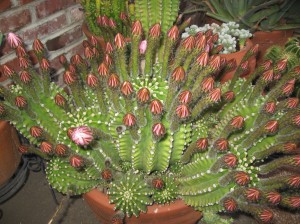 Suzi and her husband seemed fabulously content in their cozy backyard, filled with flowers and a promising (gopher-free) vegetable garden.
It’s fun to meet a couple who seems so smitten with each other. But it makes sense — they get to garden together and show off a plant with 133 blooms.
Suzi tried to claim that she doesn’t particularly love cactus. Yet, I had to question her sincerity as I scanned her patio and saw at least two dozen cacti in pots.
Perhaps one reason the flowers of cacti are so glamorous is that they are so fleeting: If you know they’ll be gone, you spend the time to appreciate them in detail.
The buds work themselves slowly up to the big moment, opening under moonlight. Their glory lasts the next day and then begins to fade.
I feel so blessed she chose to share it with me. And because I took photos, I can share it with you, http://goo.gl/aMWxf. 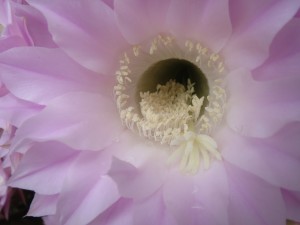 In the center of soft-pink petals, pale yellow filaments and anthers filled the circle. And each bloom had a smaller flower-shaped stigma.
Suzi received the plant from her aunt, who was moving to Oregon, where it is not cactus climate. Suzi bought cactus soil from a big-box store. Over recent years the plant has come into its prime, blooming more each year. Last year there were about 80 flowers — not that anyone is counting.
As to the plant’s success, Suzi could only guess it is the love she and her sweetie share with the plants.
However, it could also have something to do with the capful of “Cactus Juice,” with calcium, added to the pot about every three months.
The Drapers knew they had a great plant, but didn’t have a name to put with it. Last month they were visiting San Diego and came across a newspaper article, which said Trichocereus Candicans is rare in California, and comes from South America.