Plants sweat it too, give ’em a drink

How much time can I spend in my bedroom with the doors closed and the air conditioner aimed directly at my chest?
Apparently a long time. 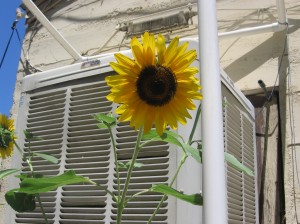 My house, built in the 1940s, has 1940s insulation. I can pretend like I’m staying in a hotel, and pad out into the heat to refill a cup of ice. With a computer, a telephone, TV and a shower, I could be in Dubai or my humble house in Chico.
But this game can’t last.
We’ve been publishing a lot of photos and stories about record-breaking temperatures, swimming holes and public places where you can linger.
And those who have plants we care about are waking up early to drag the hose around the yard.
Liana, one of Butte County’s Master Gardeners, agreed gardeners will be required to go outdoors if they don’t want to create a desert outside their air conditioned bedroom windows.
It wasn’t that long ago it was raining. Now with 110-degree temperatures, plants are stressed, she stressed.
The best thing to do is resist the urge to pour chemicals on your plants. It might feel intuitive to give the plants a little extra love, but fertilizers won’t help anything.
Ditto for the pesticides, she said.
Chemicals we add to plants contain salt, which plants don’t like. And did I mention the plants are already stressed?

Duh. Plants need water
It’s a no-brainer, but water is the best medicine.
For potted plants, it might be necessary to water each day, and maybe even twice, Liana noted.
But don’t allow potted plants to sit in the water, which will create soggy, unhealthful roots.
If you have a watering system, increase the volume, she advised.
Also remember that all plants are thirsty right now, not just the ones that look like they’ve been through a car wash and then left in the parking lot for three days.
Trees are also vulnerable to the ravages of extreme heat.
There’s no use watering in the middle of the day, even though plants will look like they will be dead by 3 p.m. Most of that water will evaporate and splashing the leaves in full sun is not advised. And let’s face it, if you’re holding a hose when its 110 degrees, your mood will be less than agreeable.
Water in the morning, Liana said.
I asked her exactly what she meant by “morning,” and learned some people consider morning to mean 5-7 a.m.
The typical wisdom is not to water too late at night because mildew can occur. But Liana said with this heat, that won’t be a factor.
While we’re giving extra love to our plants, we can also remember to be nice to one another.
This week my friend Ann called for a little solace.
“This heat is really getting me down,” she said.
“What do you want me to do about it,” I snapped back.

Corpse Flower update
The fun is over for the delightfully stinky corpse flower recently on display at Chico State University. Plant protector Tim Devine couldn’t hide his enthusiasm two weeks ago when the plant bloomed.
He opened his greenhouse, and let all who wished come have a whiff.
Soon after the show-and-smell, the plant began to fade.
Tim sent some fresh photos, the most recent which was taken Monday. You can see the entire progression, from corm to droopy mess here: http://goo.gl/jULv6.