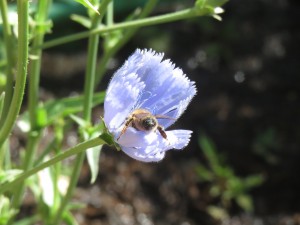 Chicory is my new favorite wild plant. You’d call it a wildflower if it was growing on Table Mountain, but in the garden area it’s a weed.
Last year, I became enamored by the light-blue, slightly lavender flowers that are most vibrant in morning light.
Upon my request, my boyfriend let the chicory grow wild and now it dots the dry grass with cheerful flowers, which are related to the aster.
The plant is drought-tolerant to the point that chicory is considered invasive in Death Valley and other national parks, and chicory root is used to flavor coffee in New Orleans. 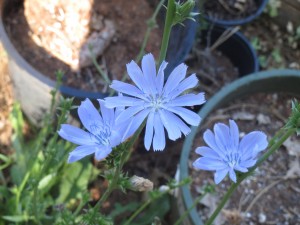 Despite their edible reputation, the deer in Paradise leave them alone.
When I posted a chicory photo on Facebook, my friend Barbara wrote that the plants are considered a “super food” and the young leaves can be used in salad if picked before they turn bitter.
The same is said about dandelion leaves, and I actually munched on a few of those. But generally I avoid eating weeds at the edge of the yard because dogs and cats could have lingered over the leaves.
In comparison, dandelion leaves are a little bitter like kale, which I buy to add to salads.

Another nice nibble are nasturtium leaves, which are peppery, and can be added to the bottom of a tray of fancy cheese.
It’s intriguing that in just a few generations, we can forget which plants found in the wild are edible. We yank plants we don’t recognize from our carefully planted gardens, and then spend $3 for watercress, which grows wild.
We walk past wild mint and chamomile, and don’t know it can be consumed until we see it wrapped in mesh and hung from a teabag string.

Yet, there are reasons. It would be just my luck, to be born 150 years ago, frolicking in the forest and gorging on nightshade and oleander (both poisonous).

Less edible edibles
For fun, I searched online for more wild things to eat.
Chicory, purslane and nasturtium are one thing.
But the website www.ediblewildfood.com detailed the merits of eating mallow.
The leaves can be tossed into salads, which sounds just lovely.
But the writers lost me when they said the roots can be boiled to “release a thick mucus,” that can be “beaten to make a meringue-like substitute for egg whites.”
These authors also note that boiling stinging nettle will remove the hairs, making the plant suitable for soups and pasta.
I should probably spend more time learning what is nutritious and what will kill me. With knowledge, I could hike in the woods without carrying a lunch, or survive in the wild if there is a zombie apocalypse. 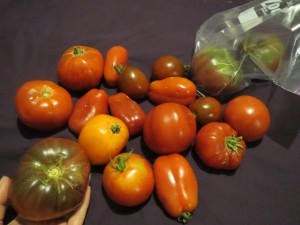 Yes, I want your tomatoes
This week Holly Whittaker sent a note and offered me a big, juicy bag of tomatoes.
I happen to have a still-steady supply of plums, so we made it an even exchange.
Holly and her dad grow about 30 plants, of all different varieties. She gave me so many I felt pleasantly spoiled, and wished I had brought more plums.
That night I was able to make my first batch of fresh salsa — tomatoes, purple onion, celery, jalapeno, lemon juice, garlic, salt and pepper. Cilantro was not on hand and would have added bell pepper if I had thought ahead.

While pleased and soon sated, I had just a few pangs of unwarranted jealousy.
It’s inappropriate to envy people who have found a system of thwarting gophers, a space with full sun and who have spent the time to nurture plants and build great soil.
The tomatoes in my boyfriend’s yard are green, and we’re hoping to harvest before the gopher takes out more plants.
I shouldn’t be jealous. Right? Especially when nice people share.
Yet, when my coworker Roger brought in a bag of produce this week to the newsroom I accused him of bragging.
Holly and her hubby Ryan also suggested a recipe for super-fresh tomatoes, including an eggplant/tomato tart, http://goo.gl/LTlXe.