Roses on my mind

Hush — don’t ask me about the home search.
That’s the reaction I’ve given friends over the past several months.
You see, it’s exhausting to get all excited and then get disappointed in equal measure.
After this fifth bid on a home, it looked close.
I even got giddy for half a second — daydreaming about plush bath mats and the perfect wind chime.
For Christmas, I would ask my family for gift cards to home improvement stores …
I was so thrilled with my home-buying prospects that I called Gwen Quail, a consulting rosarian, to ask how to safely move my rose bushes. 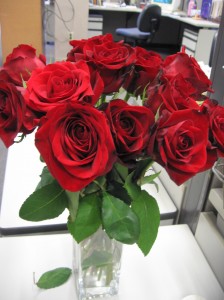 Free rose show Oct. 19
Nothing like a free event to get your mind off disappointment. The annual Butte Rose Society event, www.butte-rosesociety.org, will be 1-4 p.m. at Our Divine Savior Church Community Hall, 566 E. Lassen Ave.
Did I mention the show is free?
After 20 years as a member, Bill Reynolds made a big push to make this year very special, Gwen said, and it’s more like a “festival” than a “show.”
People will have the chance to ask almost every question they ever had about roses, and 11 consulting rosarians will have answers.
Also, there will be roses to see and smell. About 800 are expected for the rose competition.
Kids will be given things to do, and grown-ups who join the rose society will get a free rose bush.
Moving a rose
In case you have plans to move a rose bush, Gwen said the summer is the worst time, as heat adds to stress.
But roses are hardy, so making a move before April should be OK.
If someone hypothetically wanted to move a rose in a few months, she suggested pruning it back now to 18 inches to two feet. Do all the normal pruning that is done, including trimming deadwood and cutting back to the strongest canes.
After the size has been reduced, start digging when it’s time to move.
Soak the soil about a week before, for better digging.
The hole should be at least two feet deep, and as wide as the rose — 3-4 feet.
The key is to save the soil the where the plant grew.
Later you’ll mix in some compost and any soil amendments of choice. But the home soil will help with the transition.
Opinions vary on amendments, Gwen said. Some people swear by bone meal. Others like soil that contains microbes. Chicken manure isn’t bad.
Whatever your choices, use good compost, she said.
In the meantime, I’m going to take some cuttings from my favorite rose bushes, and hope for the best.
Gwen said to look for the healthiest, strongest stems. Expect that for 10 cuttings, maybe one or two will survive.
She suggested poking the cuttings into the edge of a pot and digging up any that look promising later on.