Two new pests at a window near you: stinkbugs and bedbugs

Overall, I think insects are very cool. They help to break down the organic trash heaps of the world, provide nourishment for the critter food chain and are occasionally mesmerizing in their beauty.
Yet, they can also bite, spread disease and fly out of dried noodles.
Last week I had some serious heebie-jeebies when Ashley Gebb was researching her story about bed bugs.
One of my favorite aunts brought bed bugs home after a night at a rather swank hotel.
This was years ago, before people knew much about these terrors of the night.
My aunt, a college instructor, did endless research to help others avoid the anguish she endured. She informed the family on proper hotel check-in protocol — pushing back the mattresses to look for tiny blood streaks at the edge of the mattress.
(Much more on bedbugs can be found here: http://goo.gl/8yAqgE).
My poor aunt. She was trying to help us. Instead, the family battled for years trying to avoid having holidays at her (formerly) infested home.
When Ashley wrote her recent story, I thought about one of my favorite hobbies — thrift store shopping. I remembered my aunt’s advice to always put new (to you) clothes in the dryer for two minutes, even if you bought them at Nordstrom’s.
Another bug recently entered my consciousness — the brown marmorated stink bug, http://goo.gl/rJWFb5, a new pest near an open window near you. 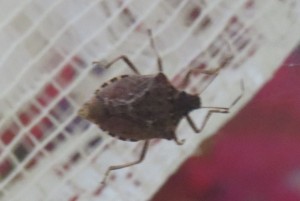 When I first heard about the bug, Ag Commissioner Richard Price was still trying to confirm it was here.
During the wait, I was chatting on the phone in my kitchen when a bug popped through the crack of my kitchen window screen.
Luckily it landed in a spider web, and I took pictures as it writhed, trapped and vulnerable.
When Richard called with the official report, I had news for him.
Stink bugs are kind of funny if you don’t have them living under your house. The idea that a bug defends itself by emitting a sulfur smell makes me want to giggle like a third-grader.
But they’re also a big nuisance and it will only get worse.
Once they’re in your yard they will naturally seek the warmth of your house in winter. You can’t blame them. You’d do the same.
This week I was chatting on the phone with wet fingernails. I saw what I thought was a wasp buzzing near the light fixture.
Great, I thought. It’s 10 o’clock at night, I don’t want to put the phone down and my fingernails are wet.
When the bug landed, I noted it was, indeed, the dreaded brown marmorated stink bug.
I wasn’t about to squish it, because Richard Price said you need to use Lysol afterwards to get rid of the smell.
With a dispensable plastic cup in one hand, I cradled the phone to my ear and stepped onto the bed. With the mouth of the cup pressed against the ceiling, the phone cradled on my ear and wet fingernails, I realized I had nothing to cover the top of the cup. So I reached with my toes onto the dresser and grabbed a wash rag.
That’s multi-tasking.
Now the stinkbug is outdoors, and alive, where it will no doubt multiply and encourage its children to seek the warmth of my no-kill zone.
I’m also now wondering if stink bugs are attracted to people talking on the telephone.
The online fact sheet from Rutgers New Jersey Agricultural Experiment Station, http://goo.gl/3ud4zY, explains that in large numbers a colony of stink bugs release pheromones that tell others to join the party, although this is not the same odor that people learn to know and hate.
The good news, according to the fact sheet, is that while they want to come into your home during the fall, they won’t breed until they’re outdoors during the spring.
The fact sheet doesn’t give many clues for control, except to say if it gets really bad you can have the outside of your home sprayed. The bugs are known to have done some serious damage to crops in Pennsylvania and other rich terrain. Richard said we should expect less than joy on fruit trees, grapes, peppers and beans.