Frogs and birds find a window in the drought, we can too

Wednesday morning I heard birds chirping —— a lot of birds. The radio was blaring in the living room, and my first thought was that KCHO was airing a segment on creatures of the Amazon. 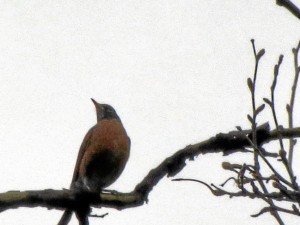 When I ventured outside, the scene was surreal. Hundreds of birds were jetting from large tree to large tree within a half-block of my house. They did not linger long enough for me to tell what they looked like.

This reminded me of the bee swarm in my maple tree, when the entire yard was a cloud of bees.

With some effort, I was able to snap a photograph of some birds, which let me see what they looked like when not aflutter. Later I sent the photos to my bird-geek friend.

My friend confirmed they “swarm like flies” and were most likely establishing mating territory in MY yard.

He likened it to a college bar on a late Friday night.

Now that I think about it, my ‘hood does have an inviting vibe, and several very large trees.

That same night I was at my boyfriend’s house, where the frogs had suddenly come alive. The loud sound of amphibian cajoling almost drowned out the sound of the rain.

I couldn’t help but feel sorry for the frogs. Maybe it wasn’t a happy sound I was hearing. Maybe they had been burrowed in the ground for this long, dry winter, just waiting for a safe, wet night to climb out and play.

Were they screaming: “Come hither. Hurry up. Let’s live a little before we die!”

Or were they content to make the most of this brief moment in time?

Seed packets arrived in the mail from Renee’s Garden seeds, and my first instinct was to get my fingernails dirty. Yet, when I take off my Sow There! hat, I am writing stories about drought, water conservation and the push for (other) people to focus on drought-tolerant plants.

Nowhere on my seed packets does it say “suitable for planting during a California drought.”

Bob Scoville, of the Glenn County Master Gardener program, http://ucanr.edu/sites/glennmg, said he’ll be planting vegetables in raised beds. This will keep his water use contained.

The Sonoma County Master Gardeners, fine water stewards that they are, have compiled a list of common garden plants, and specific varieties that do well in dry times, Bob added.

When choosing veggies, you might opt for those with short growing season, which means fewer irrigations.

A Master Gardener in Sonoma took the time to go through catalogs in search of “drought” descriptions. The list, http://goo.gl/TVI0Cw, suggests Armenian and lemon cucumbers, instead of the burpless straight-eight we all know and love. Beans use relatively little water, the list implies, as do herbs like rosemary, basil and chives.

Why not just go for a variety that sounds like the desert, such as rattlesnake beans, Navajo yellow melons, or Lebanese light green squash, which are all on the list.

Generally, most varieties of chard do well in desert and dry climates. For tomatoes, the choices are Caro rich, Pearson, pineapple, stone and yellow pear cherry.

I’ll apologize now. I’ve been waiting for a long time to try growing my own heirloom black krim tomatoes. There’s no turning back, because I have the seeds in my possession.

If I do this right, I can put a bucket in the shower and use slop water for some deep, black krim watering this summer.

While you’re at it, you can check out some other drought-tolerant gardening tips from Sonoma county at: http://ucanr.edu/sites/scmg

The link to “Food Gardening with Less Water,” for example, reminds us to “mulch, mulch, mulch,” invest in drip irrigation, and plant four tomato plants instead of 10.