5-15-2014 Sow There: Enjoy the cafe mocha moments before the gopher dance begins

Thursday, May 15, 2014
Author: Heather Hacking hhacking@chicoer.com @HeatherHacking on Twitter
The love affair with my garden has been rekindled. For the past couple of years I’ve neglected this little patch of earth, partly because I hoped to buy a house (which is still my hope), and mostly because I was gardening at my boyfriend’s house.

Now we’re back in Chico and I’ve rediscovered why I would not function well if I lived in an apartment.

I need that five or seven or 12 minutes to focus on something that is ever-changing.

One morning I might notice the dianthus – stunning in this particular light, or a weed that needs to be eliminated before the seeds mature.

Turn my head, ever so slightly, and that rose bud looks about to unfurl. Perhaps if I linger it will burst open before my eyes.

Look at that insect. The way it wiggles its antennae it could be dancing to a party song by “Pink” (http://goo.gl/yzv9ed 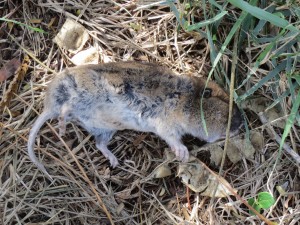 When I’m able to take that few minutes in the morning, my mind is clear for a that moment. Occasionally I’ll even receive some thoughts that are entirely not my own.

Of course, my return to my Chico garden has not been idyllic.

In my absence, the gophers held festive saturnalias and multiplied in a rodent frenzy. Piles of earth are on top of the mulch. They must have been bored because they pushed up fresh soil along the walkways, scoffing at the mean barks of the dogs next door.

One morning I spotted a hole and ran for those hose to make their day miserable. When I returned the hole had already been partially refilled.

Jumping up and down, with or without a Pink party song, has not proved effective in the past. I retained my dignity.

Plan B: My Dad and Lynda gave me a big-box store gift card for Christmas. With $25, my beau and I loaded up a cart with vegetable plants and amendments.

Several 15-gallon pots and miscellaneous five-gallon buckets were found within the overgrown bushes. We mixed steer manure, bagged compost and Osmocote in a wheelbarrow before placing the plants in containers.

A rickety picnic table has been reinforced to create a “raised bed.” By raised, I mean the plants are four feet off the ground.

A week has passed, and each day I notice new growth. If someone wants to back me as an investor, I’d like to begin manufacturing garden cages that include measurements. In my family, Mom kept track of the children’s growth on the threshold to the kitchen.

We stood tall against the wood as Mom marked our height and the date. Six months, or a year or five years later, we would be measured again to document our upward progress.

For the plants, I note that every few days I’m able to push a leaf or two above the next rung on the tomato cage.

As for planting by seed, Sherri Scott at the Saturday farmer’s market gave me the cold facts.

“This was planted by seed a month ago,” she said, holding up a four-inch container.

I could plant by seed but would do best by choosing varieties that have a quick maturity date, Sherri advised.

I sometimes listen to advice, so I planted the seeds I had on hand. These went into the “other” raised bed that has been twice ravaged by gophers.

My boyfriend said there’s no harm done, as long as I understand the plants are a gift to the gophers.

Until they get a whiff of things growing within their grasp, I’ll enjoy each moment when the seeds emerge from the soil, grow their second and third tier and stretch to the sky before being unceremoniously grabbed and gobbled.

This entry was posted in Uncategorized and tagged gopher. Bookmark the permalink.