Adult brown marmorated stink bugs can be differentiated from other stink bugs because they are larger and more pungent. Also, the antennae have white stripes. Photo courtesy OF UC Agriculture and Natural Resources
The stink bugs have started to warm up and wake up. So far we’ve had three unwelcome visitors. 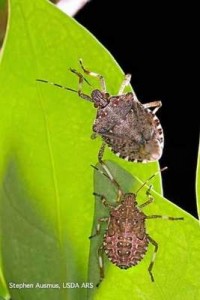 The first creepy-crawly was making a slow march up the dining room wall. It’s hard to mistake the stink bug, which is shaped like a Three Musketeers shield.

The next night we were playing a board game when out of nowhere a stink bug was in my hand.

As per their name, stink bugs smell like rotten eggs when squished. Rather than smack them with a fly swatter, it’s best to capture the bug gently with a napkin. I like to flush the living bug down the toilet.

Some folks will make an effort not to kill a bug inside the house. This is probably the right thing to do. However, I’m not that good of a person.

The brown marmorated stink bug is new to this area, larger than other stink bugs, smells worse and is determined to eat our vegetables.

I say flush it before it has a chance to mate.

Agricultural Commissioner Richard Price and I had a rather lengthy discussion about stink bugs last year and again this week. The marmorated brown stink bug has done a serious job of devastating people garden’s as well as commercial crops.

They nibble at least 170 plants. I checked the list of its favorites — catalpa, garden tomatoes Southern magnolia and sunflowers.

I don’t know what’s growing in your neighborhood, but the favored ingredients of this bug are all within a stone’s throw of my front door.

BEAUTY IN ALL THINGS

Before I continue a long and heartfelt rant about this creature, I must say that its birth is quite beautiful.

Some guy named Peter posted a YouTube video of a white cluster of eggs he found on his windowpane. Rather than squish the eggs like a sane person, he watched for hours as one after another of the creatures hatched.

The balls are opaque pearls. For just a moment you can see little dots — perhaps eyeballs. Then translucent creatures emerge, wraithlike. As they spend time outside the egg, their slithery bodies begin to change color. At the end of Peter’s two-minute video, the baby stink bugs are going crazy, with legs wiggling and bodies marching off toward their first plant demolition job.

In some ways, they did resemble minions.

At this point, any reasonable person would have smeared the bugs against the windowpane like Rain-X.

WHAT WE SAW IN MY DINING ROOM IS JUST THE BEGINNING.

Price said we’ll probably see damage to our home gardens this year. He’ll be watching to see if there is significant damage to commercial crops.

Adult stink bugs bully their way into your home and hide in the little cracks and crannies during the winter.

In spring — about now — the mature bugs will come out of hiding in search of your garden. Once outside they will grab the first receptive mate and lay 18 bazillion eggs, perhaps on your window pane.

Price said we’ll have a hard time battling this beast. The amount of toxic chemicals needed to kill the critters would end up harming the humans more than the stink bugs, he said. 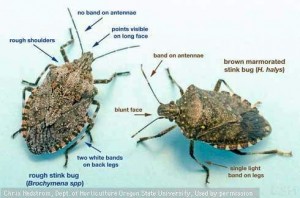 The USDA researcher revealed that an orchard was sprayed and it looked like the stink bugs were 100 percent dead. However, within about 72 hours of treatment, one-third of the stink bugs came out of their pesticide stupor and revived.

This is what Richard meant when he said you could do more harm to yourself by trying to chemically treat them.

However, you can always pick them off one by one.

They do stink when cornered, but a little stench never killed anyone. Price suggested having a coffee can filled with soapy water nearby. Stink bugs aren’t too smart and they aren’t too quick. You should be able to shuffle the bugs into the lethal soapy water.

If the bugs become a pest indoors, Virginia Tech suggests you attract them with a bright light. Fill an aluminum roasting pan (the kind you throw away) with about a gallon of water and some liquid soap. Shine a bright light on the pan and leave in a dark room for 12 hours. Stink bugs should be attracted to a drowning death.

Also, try to leave lights off near the entrance to your home, so they don’t hop inside.