New kitty took some time to sniff just about everything within a small radius of the back door. Heather Hacking — Enterprise-Record
A few of you might recall that there is a new feline unit in my life. 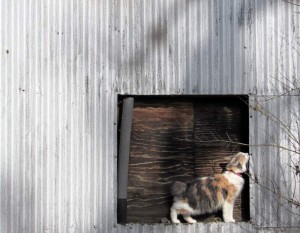 If my life had no outside influences, I would have written about the kitty each week since Valentine’s Day.

There would have been vivid reports from the first day she used the cat door, hid in the bookshelf and had a face-off with the cat I did not adopt. She has leapt from loquat tree to rooftop and learned about the mean mongrel next door.

Until now, I have kept news of her meandering to a minimum.

“You’re not going to write about the cat again,” my boyfriend asked as I was typing for what seemed (to him) like hours about her cat cuteness. “You’ve already written two columns about the cat,” he opined.

“But people want to know everything about her,” I said, genuinely shocked. 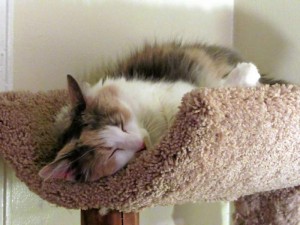 Last week my friend Perrin asked if something had happened to my cat. Was she hit by a car? Something bad must have happened because most people would have written every week about a new cat, she said.

“People don’t want to know every cute thing she does,” I said, parroting a certain curmudgeon.

“Yes they do,” Perrin said. “I want to know all those details.”

A CAT WITHOUT A NAME

“For example,” Perrin querried, what did you name her?”

I was hoping some kitty character trait would emerge that would provide the perfect name for the cat.

“Does her breathe smell nasty tonight?” I might ask as she purrs and nuzzles my ear.

“Maybe we should name her Dragon Lady?”

Her whiskers are astounding in their perfection — long and white and slightly curved.

Yet, Whiskers sounds like a cat name from a turn of the Century British children’s story.

She’s also among the softest creatures I have ever touched.”Furball,” is another name considered and rejected.

In the interim, we could call her “Cat.” This was the default name Holly Golightly chose for her cat. Yet, Holly chose the name because she had no plans for feline attachment.

We called her “pretty kitty,” for a brief moment until we realized P.K. sounded cute. However, Jenny’s son is called P.K.

To be honest, the name we use the most is “Feline Unit,” but there’s no real way to shorten that with initials.

The latest name in consideration is Catness. Unfortunately, people might think we named her after Jennifer Lawrence’s character in the “Hunger Games,” and that just seems … well … dumb.

Yet, “Catness” pretty much sums up her personality.

When she drinks the water in the plants, my boyfriend will say “that’s her being a cat.”

The bedroom is off limits. This means any time the door is open a single inch, the cat makes a mad dash toward the forbidden room. The result is a less than glamorous cat/human tussle under the bed.

She spends at least a third of her day licking herself, and perhaps the same amount of time begging to be petted.

If these aren’t all displays of “cat-ness,” I don’t really know what “cat-ness” is.

Then there is the light laser. For two bucks we have gained hours of ridiculous fun, watching the cat stalk and pounce on that tiny red beam of light. By the end she’s usually so exhausted she’ll curl up in a ball, the epitome of cat cute-ness. 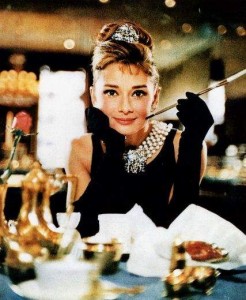 The Butte County Master Gardeners are some of my favorite people. To prove it, I pester them all the time with garden questions. You can call Wednesdays 9 a.m. to noon and Thursdays 1-4 p.m., 538-7201.

To ask them questions in person, several workshops are planned. They’re free, but you need to call and make a reservation. All will be held at the Master Gardener demo garden at the Patrick Ranch Museum, 1038 the Midway, 10-11:30 a.m.

Saturday the talk is on planting tomatoes by seed.

March 18, learn about raised bed gardening and how to make a box that will keep gophers out.

March 21, catch up on the basics of keeping chickens in your back yard.

March 28, all about drip irrigation.

April 11 is the only workshop with a fee, $30 for materials. At the end you’ll have built a compost bin and gathered know-how for your composting future.