Last summer I planted a six-pack of Vinca rosea in a big, thin metal bucket near the front door.

Vinca rosea is one of my go-to summer flowers and thrives despite the heat.

By now, I know this plant pretty well. When the cold nips at the doorstep, these summer stand-outs turns black and die.

Yet, these particular plants did not die. There were times I could have tossed the plants on the compost pile, but they seemed just barely alive. 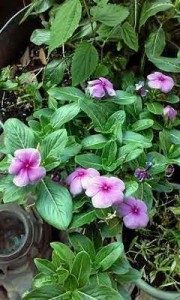 In early spring I watched them struggle back to life, and now they have a prominent spot on the picnic table.

Other plants have died just as mysteriously as the Vinca rosea have lived.

THE YEAR IN POTS

Most of my plants are in pots this year and I’m trying to grab some knowledge quickly so I don’t kill them.

Dusty miller, for example, has silvery, fuzzy leaves. Now I know why it has survived in my garden.

Other fuzzy plants include lamb’s ear and that wild plant in Paradise with hot pink flowers that looks a lot like lamb’s ear.

It makes sense that silvery plants are drought-tolerant, as this category includes sage, salvia, lavender.

Some other specifics in the article are sunflowers, sedum, zinnia and geraniums.

Note, most of the plants in my pots do not have these drought-tolerant attributes.

What goes in the pot

I’m no expert on planting in pots. However, I have read numerous times not to use dirt from the yard.

You would think that buying potting soil would do the trick. However, the texture just seems wrong to me.

During my time off from work I chatted with Bob Scoville, one of the valiant crew with the Glenn County Master Gardener Program (865-1110).

He said he has heard to add perlite to pots as a soil amendment, to help with water retention.

Perlite is white and is actually a volcanic glass. It holds water and water-soluble nutrients. Bob said it is known to improve the “tilth” of soil.

Tilth? What the heck does that mean?

Tilth is a word that appears on the first page of Bob’s Master Gardener’ handbook.

He said its hard to define, but easier to see and feel.

“Good tilth – you’re able to grasp it in your hand,” and it will be firm, but not soggy, workable but not solid.

“When you have really good soil you know what it feels like in your hand,” Bob said with a flair for soil romanticism.

“Tilth is the word that describes that feeling you have as you feel it in your hand,” he said, confusing me all the more.

He started to describe the 12 major USDA soil classifications. I noted I had surgery recently and did not have the mental stamina for an extended soil lecture.

Instead, we focused on the merits of coffee grounds as a soil amendment.

In addition to improving tilth, coffee grounds provide a small amount of slow-release nitrogen, Bob continued, which is good for his citrus plants.

It would seem natural that if coffee grounds are good, ground coffee would be event better. Bob fielded this questions from a gardener, and explained to her it doesn’t work that way. Running water through the grounds leaches out salts that are bad for plants.

One can only imagine how those salts react in our human bodies.

Bob said when he makes a pot of coffee at home, he scoops out the grounds and adds the dark stuff just a few inches under the soil near his plants.

I’m doing the same with my potted plants. We’ll see how much tilth happiness this brings.