Change is good, drought-tolerant garden change is even better, June 25, 2014

I’m learning a thing or two about yard transformations. Just like changing the color of our hair or buying a red, racetrack-ready convertible, changes to our exterior living spaces can be an astounding expression of (new) self.

When I was hoping to buy a house last year I read that the majority of changes to a home take place within the first year of ownership.

The remaining changes take place in a scramble, one month before the home is about to be sold again.

That’s a shame because change is good to mix things up.

I frequently spot yards being converted to drought gardens. Some of these are just plain ugly.

I know, I know … the one-gallon lavender and six packs of Dusty Miller will one day be large and wondrous, billowing in the summer breeze. Yet, it’s hard to visualize the future when that pile of wood chips is blocking my mental view. 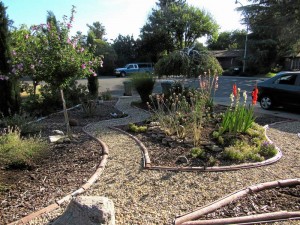 Bitz’s yard has had time to fill in, with flowers, long stalks of grass and silvery leaves, many of them billowing in the breeze.

About two years ago she decided to take on the project. When she spotted plants she liked while driving around, she’d stop the car and snap a photo. Then she asked nice folks at nurseries to help her find those plants.

As she had hoped, these plants are doing well including rose of Sharon, cypress, bottle brush, tall billowy grasses and flowers for which she has mostly forgotten the names.

She’s able to water them all by hand.

The garden areas are mulched with wood chips. For the paths, she picked smaller, smooth stones suitable for bare feet. The stones are kept in place with four-inch wood rounds cut in half. She had a lot of help from her friend Tom, who literally helped move the rocks, and also allowed her to gather rocks from his property in the foothills.

At the back of the yard, closest to the house, is a round labyrinth. The foundation is red lava rock with alternating round and elongated stones creating the walkways. The last brick of the maze was installed 11-12-2013, which is also the same day her grandson was born.

Bitz has crafted intriguing attractions here and there, including a wooden bench almost hidden in a corner. A small tree threatens to someday shade the resting spot.

The back yard is green and lush, although even this is mostly an illusion. 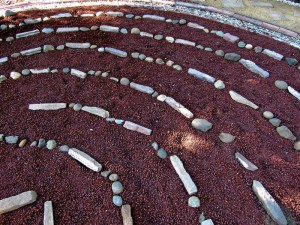 Pavers were professionally installed and she invested in shade structures for an outdoor dining area. Numerous garden beds are covered with mulch. After two years, her bushes are reaching maturity.

In several other planting areas she has lush, green, no-mow faux lawn.

The good stuff isn’t cheap, but Bitz found a landscape store selling some scraps. She as able to piece together the shapes she needed.

She said the fake grass is very much like carpet, and she sweeps away the leaves in the fall.

In one corner, she has a child’s swing hanging from a tree, and an adult’s hammock in the shade of the same branches.

When she turned 50, friends came over to paint the fence. Each friend or family member had their own fence slat, or two if they really had something important to draw or say.

Mostly people used the space to tell Bitz they loved her.

For more inane prattle, check out my blog at www.norcalblogs.com/sowthere. Other contacts, @HeatherHacking on Twitter and Facebook.

This entry was posted in Uncategorized and tagged drought, layrinth. Bookmark the permalink.