The home of Bob and Connie Prevot is one of the stops on the Paradise Garden Club tour this weekend. Each of the homeowners on the list has taken steps to save water. Bill Husa — Enterprise-Record

We’re on the verge of another long, hot summer and people seem to be taking water conservation up a notch.

Granted, this is also the first week when we’ll pay penalties if we exceed our new water budgets.

(To check out your personal water budget online, go to: https://usage.calwater.com and punch in your account number).

I know people have been converting their lawns over the past year, but its just now that I’m noticing them left, right and right in front of me.

Several weeks ago we had a follow up visit at UC Davis in Sacramento. With 35 minutes to kill, we decided to take a leisurely stroll and check out some horticultural handiwork.

The folks who live near UC Davis really had their conservation mojo going on. Similar to Chico, towering trees have spent the last 100 years fighting each other for the right to cast shade.

The houses are built close together, with small front yards that end abruptly.

On several blocks we wondered if homeowners had fed on each others’ enthusiasm. Or perhaps there was some neighborly conservation competition. 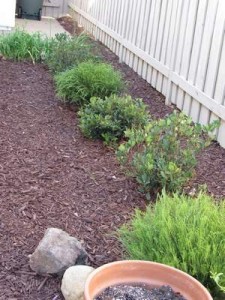 In the little yard next door, the residents had gone hog-wild with geranium. You guessed it, geranium will do a mighty rebound after being nearly killed by lack of water.

A few more yards down the way and we spotted a yard in that unfortunate stage of drought conversion. I’m less than thrilled by yards covered in a thick layer of bark and just a few baby drought-tolerant plants.

Much better was the nearby bark-covered yard with interesting large ceramic containers overflowing with ornamental grasses.

On our way back to the hospital we saw a yard with a fabulously lush lawn.

The green space was so green I stopped to make fun of it, and to take pictures.

We’re in a drought, right? Nobody has lawn like this anymore, except maybe at Disneyland.

When we got close, we learned this was high-quality “AstroTurf,” lawn carpet, plastic greenery. When we lingered longer, we saw that the same synthetic grass was placed in the strip between the sidewalk and the street. One more fantastically fake touch was plastic no-mow along the driveway near the house. Instead of driveway strips of grass, these clever folks had placed greener-than-life carpet strips.

CalWater has announced a $1 a square-foot lawn replacement program (see important details online:https://calwater-turf.droplet.us). I’m excited to see what people come up with for their yards in Chico.

Maybe we’ll see more yards like that one on Citrus with the bowling balls.

I’m wondering if those cacti qualify as “climate appropriate plants.

Even my father has gotten into the drought act.

He moved into a fantastic new house a while ago. Being the gracious adult child that I am, I have been giving him a hard time about his lush new yard.

The former homeowner obviously loved the place. In her cleverness, each season produces a new batch of flowers along walkways and terraces.

I was mostly kidding with Dad, but it seemed like he had more plants than your average home. Down the street the (U.S. Bureau of Reclamation flood control) lake was several feet lower each time I visited.

I understand Dad’s rationale. The landscaping is beautiful and the yard is part of the reason he loves his new house. Should he sacrifice this fine feature the very first year he moves in?

This most recent visit I was pleased to see Dad bragging bout the mound of mulch he had spread throughout his beautiful terraces.

I’ll try to restrain myself and not ask him whether he is living within his new state-mandated water budget.