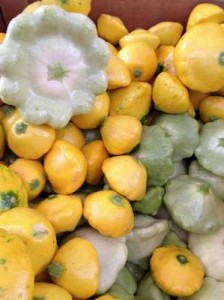 People can be pretty darn inspiring.

Last week I had fun talking with LaDawn Haws. Her former front yard included a water-hogging lawn that rarely saw footprints. She took a leap of faith and now has an eclectic, fruit-bearing, flowering yard for dry days.

During our conversation, LaDawn said she had been diagnosed with breast cancer in the middle of her lawn conversion. With that news, she poured everything she had into getting the drought work done before surgery.

This whole concept sent me reeling. LaDawn got busy and got something done. When I learned I had uterine cancer I immediately started eating chocolate and didn’t stop until six weeks after anesthesia.

From diagnosis to return to work was about 2 ½ months. I managed to put on 13-18 pounds — depending on how you do the math.

It’s silly and uncomfortable to feel chubby in summer. First off, I don’t fit into my clothes. I don’t want to run around naked when I’m feeling chubby, and can’t afford a new wardrobe.

My Saturday sidekick at work turned me on to myfitnesspal, a free app for smartphones. I think the concept is that if you record every morsel of food that moves through your gullet, you’ll come to a reasonable mind frame before sitting down with a 1,000-calorie chocolate bar.

With the app you punch in a moderate daily calorie goal and spend quality time with your phone after each chew.

You can also record calories burned through exercise, such as a bike ride from home to the downtown farmers market (66 calories).

My friend Ellen, a psychologist, advised me not to call this “thing” a diet. I’m better off saying that I’m making new choices about the foods I’m eating.

When we are “making new choices,” it’s funny how that’s all we seem to talk about. For some of my girlfriends, the talk is constantly about their new boyfriend. For new moms it’s baby talk. For dieters, we chat about nonfat Greek yogurt and how many laps we swam at the gym.

IT TAKES WATER TO EAT

Meanwhile, most of us are “making new choices” about how we use water. When my friends go to trivia night at Woodstocks Pizza, we literally talk about how often we flush the toilet and methods for washing dishes by hand.

One way to battle both the drought and obesity is if Californians simply stopped eating.

It takes a lot of water to grow those low-calorie vegetables that taste just fine with a sprinkle of Ms. Dash.

I found a cool website by the Water Footprint Network, http://goo.gl/ILRD0t, which breaks down the water needs to produce certain foods. The data is based on world food supply, so you’ll need to do math. Note that one gallon equals 3.78541 liters.

An article on the Huffington Post is less comprehensive, but list the foods and their water use in gallons per pound: http://goo.gl/d8nBuU

We are training ourselves to think about the amount of water in a 10-minute shower and water usage in a full load of laundry. However, each morsel of food that we eat takes water to produce.

There are 480 calories in a caramel ribbon crunch frappuccino. But I had no idea it takes more than 66 gallons of water just to have one cup of black coffee. I drink a lot of coffee.

Then, of course, is my guilt and shame — chocolate. Could a pound of chocolate really take 2,061 gallons to produce? That’s more water than I use at home in a week.

Even my new, more healthful diet still requires a boatload of water.

Apple trees need 100 gallons to produce one pound of apples. It’s also about 100 gallons for a pound of grapes or kiwis. Strawberries need about half that. Tomatoes might set growers back 26 gallons per pound, and cucumbers 42.

I started looking into food and water use because I wanted to know whether it used less water to grow veggies at home or to buy food at the market.

Until I learn otherwise, I’m going to do both.

For more inane prattle, check out my blog at www.norcalblogs.com/sowthere. Other contacts, @HeatherHacking on Twitter and Facebook.