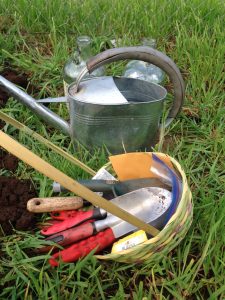 Tuesday was World Teacher Day, which was perfect for a visit to the garden at Sherwood Montessori school. Several of the students showed me their tall, taller and tallest green, leafy vegetables, planted in a series of raised beds outside their classroom doors.

They put the plants in a few months ago, and there was enough for many a salad.

However, I got the impression these 9, 10 and nearly 11-year-olds were so proud of their garden talents, they would rather look at the plants than eat them.

During my visit, the kids were digging holes near the drip irrigation recently installed by garden helper Burt Levy. Next they carefully transferred small plants of spinach, kale and broccoli, with the patient guidance of my friend Luisa Garza.

I almost overstepped my boundaries as I instinctively reached to pluck the flower from a 2 1/2 foot tall, red lettuce plant.

If that job is to be done, it’s a job for the children, Luisa said.

That’s a bad trait of mine. When I attend a backyard barbecue, I pull other people’s weeds.

Wednesday was picture day at the school, and groups of students decided to dress in costumes. Our class had chosen Harry Potter, and many of the children had lightning bolts drawn on their foreheads. Others wore men’s ties.

I asked one boy about a plant with some particularly large leaves. My guess was that this was chard. It was broccoli.

I don’t know about the rest of you, but when I grow broccoli it might double in size before winter sets in. Next, my broccoli plants stall in the yard, waiting until one spring morning when I’m not paying attention. Then, the plant suddenly bolts and I get flowers and no food.

For the school garden, these plants were put in the ground at the beginning of the school year, one child informed me.

The best time to plant seeds is in July, according to the UC Davis planting guide.

If we want spinach in March, now is the time to put seeds in the ground. Or we could plant small plants, as was the case this week.

While we were talking, Luisa encouraged me to pet the small marigold flowers. These were signet marigolds, which have a citrus scent. The flowers are also edible. What fun to sprinkle some colorful (and citrus-smelling) petals on ice cream or in a salad.

However, it is the French marigold, and not the signet marigolds, which repel nematodes in the soil. The University of California Integrated Pest Management folks have more information on this topic at http://tinyurl.com/zf2j42 v.

Another lesson on Luisa’s plate this week was knowing which foods are fruits and which are vegetables.

We generally consider cucumbers, squash and beans to be vegetables, while the true definition has these foods as fruits.

As the children sat around an outdoor picnic table, Luisa explained that fruits grow from a flower and have seeds. The fruit category includes avocados, cucumbers, mangoes and tomatoes.

The list of veggies includes the parts of the plant that we eat, including leaves, roots, stems and buds.

After my confusion with chard and broccoli, I searched online and learned that broccoli leaves are indeed edible. Some people cut out the center ridge, then add the rest to a stir-fry, just as you would prepare spinach or bok choy. The flavor of broccoli leaves is like broccoli florets, only mild. The leaves also are packed with similar nutrients. One raw ounce of broccoli leaves packs 90 percent of your Vitamin A needs, 43 percent of Vitamin C, and even some protein.

Just for fun, I clicked a few more times online and learned that many people will also sauté squash leaves.

Careful, of course, because the leaves of some plants, including tomatoes, are toxic.

One more thing I learned Tuesday is that some of the best teachers, like Luisa, are those who are having the most fun.