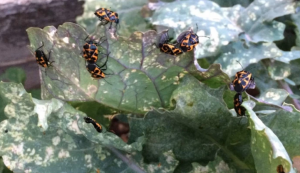 By HEATHER HACKING | Columnist
PUBLISHED: June 28, 2018 at 10:40 pmWhen I returned from a quick vacation I found uninvited kale sitters in my garden. A hundred harlequin bugs would not be an exaggeration for the number of critters that were happily munching and reproducing on the large kale plant that remains.

I knew they were harlequin bugs because just a week before I had been amazed by some fascinating egg clusters on my garden leaves. David Walther, garden guru at Spring Fever Nursery and Gardens, saw my social media post. I had posted a magnified view of some “amazing” critters, which looked like jewelry glistening in the hot sun. David knew they were harlequin bugs, new to this area and hard to kill.

“Squish those guys,” he wrote.

When I arrived home from my journey, it was much later and “those guys” had grown. They had gathered. They were greedy and having a rowdy time on the plant near my fence.

I didn’t bother to unpack my bags. My homecoming included working until the fall of darkness, scooping up red and black harlequins and dropping them into the trusty silver bucket filled with soapy water.

I must admit, I was once squeamish about touching bugs, smooshing bugs between my bare fingers. I might still scream when I see a hairy spider or when a bug flies into my hair. Yet, recently I have become a bug warrior.

When those books recommend hand-picking, what they really recommend is to get elbow-deep into a bug’s life and take charge of the underside of those leaves.

After most of the visible harlequins had been whisked into a watery grave, I began the search for the next cycle of life. Under nearly half the leaves I found the neat columns of silvery-looking eggs, which are actually black and white when viewed through a zoom lens.

David said that the harlequin is “new” to this area. My research notes that the kale-lovers are persistent pests for plants related to cabbage, and suck the life out of plants.

They’re rarely found north of Colorado, according to a University of Florida bug website. Apparently, the authors of this blog did not have a chance to check out my back yard.

“Eggs of the harlequin bug resemble tiny white kegs standing on end in a double row. Approximately 12 eggs are laid together in one batch, usually on the underside of the leaves of the host plant. Each egg is marked by two broad black ‘hoops’ and a black spot. The eggs hatch in four to 29 days, the time varying with the temperature.”

I can attest that in this weather, the eggs hatch in about a week.

Another website said kale is often used as a “trap plant.”

When I read, this I was very pleased that I had allowed one kale plant to remain while I traveled. Only six feet away, my two tomato plants are doing well and currently bug-free. Believe me, I checked. 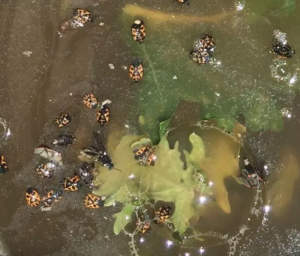 I found a nasty hornworm and three tank-shaped stinkbugs, but no harlequins on the tomatoes and zero egg masses under the leaves.

This entry was posted in Uncategorized and tagged harlequin bugs, kale. Bookmark the permalink.