I remember my grandmother’s voice on an early evening as we sat in her yard. The lawn behind her yellow stucco house was green and wide, a place where we could run around in the dresses she made on her sewing machine, and impress her with the cartwheels we had learned in gymnastics class.

“What are those Gram,” I asked, pointing to some tall flowers that looked like they grew from stakes in the ground. “Hollyhocks,” she recalled. “When I was a girl, we used to take the flower and put it on a finger, and pretend it was the skirt of a beautiful ballerina.” Her voice was soft and just a bit girl-like, as she demonstrated the long-ago dance on an overturned index finger. 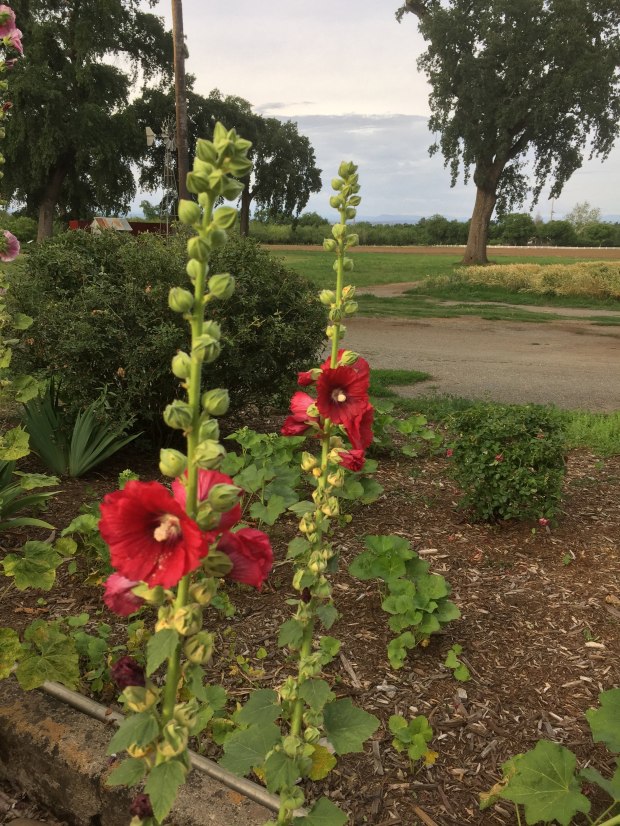 At the time, age 7, I thought this was sad. Didn’t she have any real dolls to play with? Later she would tell me her stories, about working for her keep from the age of 14 in someone else’s big house on a steep hill in San Francisco.

I’ve shown the flower skirts to children since then, often with the same quiet tone, and usually I receive the same unimpressed reaction I gave my grandmother that day. The tall flowers remain special to me, a reminder of that moment with my grandmother in her yard – with the apricot trees and a view of sloping hills that are now covered in tract homes and strip malls.

Last week, I took a stroll around the Patrick Ranch museum at dusk. When I work my occasional part-time job at the ranch, the garden tour is my ritual. When I closed the white picket gate, I almost bumped into a tall beauty – white hollyhock, with blooms at eye-level.

Tall flowers, I thought. I like tall flowers. My mind was running with this idea – perhaps a future column. Hollyhocks, cosmos, foxglove, phlomos.

Maybe I would consider butterfly bush in this category, but likely not. If butterfly bush is a tall flower, I would need to include oleander, and then I would be talking about any flowering bush, including those that grow in the median of the freeway.

I continued my stroll, turned at the edge of the house, and ran into something even more delicious. There, in the partial shade of the redwood trees, were dozens of tall, overly-ornate blooms in quiet colors of light and dark mauve. I may have overlooked this flower before, but on this day the flowers were tall and brave.

Bear’s Breech, I learned, after scouring many websites with a vague description of the plants’ attributes. I shouldn’t be surprised that the gardeners at the Patrick Ranch museum know how to choose the best flowers and put them in ideal locations. A home gardener would need a lot of room to let this beauty settle in. The dark green leaves rival the size of an elephant ear. In the large clump, the flowers contrast the horizontal angle of the leaves, somewhat like skyscrapers bursting above the fog.

Tall flowers – strong and sturdy. I admire that.

Yet, for some reason, when I try to grow tall flowers they end a flop, literally. I’ve grown foxglove in the past, and needed to stake the blooms that dared to grow very large.

This same luck was had with gladiolas, which I would not recommend. My gladiolas grew almost sideways. Later, the corms continued to multiply for years. What I accidentally grew was a wide clump of clumsy flowers. Why would I grow gladiolas when I can buy the for $6 a bunch at Trader Joes – uniform and straight as a tent stake.

Cosmos, another tall flower, will grow at least four feet, and is easy to grow from seed. I enjoyed these along my fence line one year, with cool impatiens at the base. Cosmos will certainly flop over as well, but they’re so willowy the flop adds to their charm.

Until I learn to grow tall flowers, I’ll continue to enjoy the in the places where they grow.