Some of us remember the old-style camping tent.

On a camping trip, you roll into the park at dusk after a long, dusty drive.

The kids are sent off to play as the parents unpack the car, truck or van. From a safe distance, children hear the clank of metal poles.

The tent was inherited from grandfather and probably predates World War II. The color is olive green, stained with brown from various adventures. The heavy canvas can withstand rain and hail, and muffle the laughter from late-night storytelling. 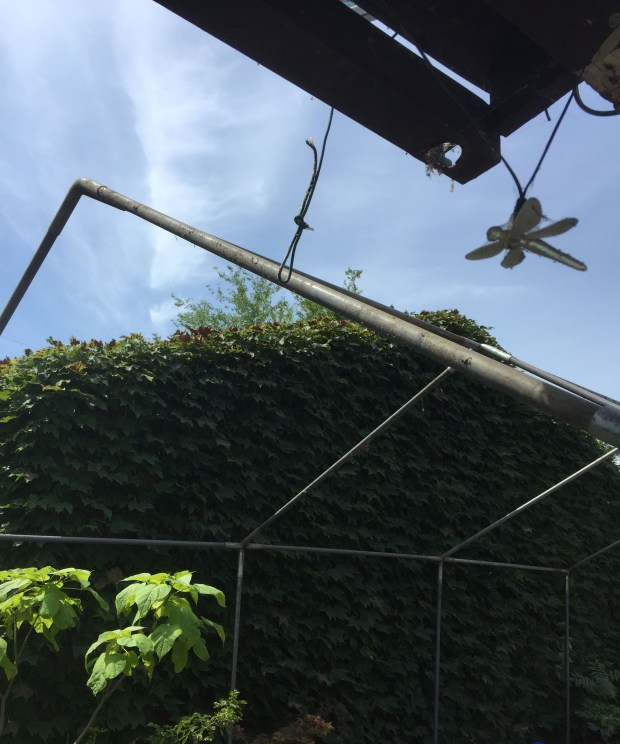 The problem is putting the thing together – usually in the dark.

Nowadays, we have tents with bendable poles that slide together without a harsh word being spoken. Today, you can pop a tent up in 10 minutes. Children can even help.

Long ago, with grandfather’s tent, the miscellaneous metal pieces were dumped on the ground like a puzzle. Some pieces had elbows, and others were shaped like a T.

The parents worked “together,” which often meant disagreeing on which piece should be connected next. Shouts of “just hold still” could be clearly heard throughout the campground. Near the end of the confusing job, sentences were punctuated with curse words.

Last week, the tree demolition crew buzzed through my life. Every tree was destined for destruction.

The noise from the chainsaws was unsettling. More troubling was the image in my head of what the yard would be like when the job was done. I saw 106 temperatures, a roof so hot the squirrels would singe their paws. Citronella candles in the shed would melt from the exasperating heat. Every shade plant would die. Nights in an unshaded bedroom would feel like sleeping in a crock pot.

I understand the logic behind the change in my landscape. My landlord decided to “Get it done.” The mimosa tree literally had dead wood dangling. To prevent damage to my car, I parked 20 feet from the front walkway. My landlady decided to trim the trees once every 10 years. More trees will return, because that’s what trees do.

On day two of tree destruction, I did the sensible thing and joined my friend Thor for a few days at Lake Almanor.

When I returned, my house was how I had envisioned. The men wearing chartreuse vest and matching hard hats were gone. Huge, round chunks of tree carcasses remained, pushed against the perimeter of the property. Sawdust covered the mostly-dead Bermuda grass lawn.

Every living thing was exposed.

My first thought was to spend the remainder of the summer at La Flor De Michoacán Paletería y Nevería, my favorite ice cream shop, rather than face the hot reality of the interior of the shadeless house.

A little help from a friend

However, Thor saw the pain on my face. Being the nice man that he is, he said we should brainstorm for solutions.

I remembered a pile of metal poles that were leaning against the Mulberry tree. The tree was now a stump, but the men with chainsaws had returned the metal to generally the same location.

The poles were the bones of a shade structure. Once upon a time, when the Handsome Woodsman lived in Paradise, he built the shade structure to cover his Ford F-150 truck.

When he moved in with me, he planned to rebuild the shade at our shared house.

Yet, that never happened. Why would it? Putting up a structure like that – with endless mysterious pieces and hoisting a heavy tarp – was always a job for another day.

I found the black, plastic milk crate that contained those mysterious pieces. The tarp was hidden under sawdust. It was still in good shape because, until recently, it had been stored in the shade.

Thor, ever clear-headed, said if we worked in the relative cool of the morning, we could slap up that old shade structure and begin to rebuild what once was a more normal life.

Rather than dump the puzzle pieces on the ground, he lined up the pieces in a logical order. I was of very little use at this point, but managed to follow directions and found a piece of paper and a pen.

With mathematical precision, he determined what each piece of metal should be used for. We counted the poles (they were all there!), and he diagrammed the logical location of each piece.

We climbed a ladder, straightened poles with a maul and stood on the picnic table. We spent money at Harbor Freight, then used ropes as a pully system to drag the heavy plastic across the frame.

The structure, now complete, has as shade footprint of 16’x20′ and is 10 feet tall from peak to base. The time spent to erect it took about as long as it took the tree crew to transform the yard.

Thor was my new hero and together, we affected change.

As is always the case in life, there is more work to be done.

This entry was posted in Uncategorized and tagged sun. Bookmark the permalink.