When the cruise ship pulled into Victoria, British Columbia, I had a quest: Butchart Gardens (www.butchartgardens.com/our-story/).

The gardens are renowned for the great number of flowering plants crammed into a small place. Long ago, limestone was mined to build roads in Canada, and to make Mr. and Mrs. Butchart very rich. When the limestone was gone, what remained was a huge, ugly pit. 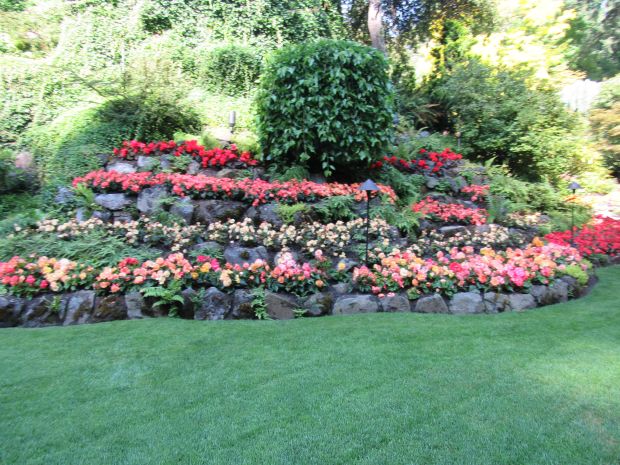 Jennie Butchart may have felt guilty, or likely was a very kind soul, and used her newly-mined money to pay for wagonloads of topsoil. Over the next several generations, the Butcharts transformed the eyesore into a watercolorist’s dream.

Spanning 55 acres, the gardens grow up and down the terraced cavity, with narrow paths now overpopulated with flower geeks snapping images for social media.

I wanted to see it all. I wanted to linger over every plant. I wanted to indulge in pollination rituals and smell every rose named for a celebrity. Yet, our silly cruise ship tour only allowed 1 hour and 20 minutes for flower exploration.

Less than four hours seemed like an insult. Yet, I was on vacation. Complaints are not allowed when you are intent on family fun. Just like everyone else, I clicked my camera rapid-fire. I would relive those moments when I subjected my friends to three-hour vacation slide shows.

Our timeline at Butchart Gardens did not allow for a snow cone stop, nor did I even consider waiting in line for the bathroom.

Our only stop was to ride the carousel. One of Dad’s many mottos is that you can never walk past a carousel.

Meanwhile, I was on a quest.

My friend Chrissy had taken the Alaska/Canada cruise the week earlier. We had arranged a game where she would hide a message for me somewhere in the gardens. She found a great spot, hid the note under a rock, and sent me pictures. One picture was of the view I would see when I found the note. The other picture included a stone bench and her elbow pointing toward a rock.

For an hour, my family raced around the former limestone quarry. The gardens at the rim of the former quarry were definitely “up high.” I followed them to the bottom of the garden area, and back up again. I did not see a stone bench.

We rode the carousel and I must have become disoriented, because I momentarily forgot about Chrissy’s note.

The path ended at the gift shop, but I had not found the hidden note.

My family said they would stall our cruise ship bus driver – Dad can extend a story with segues and rich detail.

I raced back down the path, razzle dazzle past new groups of garden viewers who had only begun their 1 hour and 20 minute journey. People had stopped in the middle of the narrow path, posing with their extended families and comparing the heads of their toddlers to the size of dahlias.

As I power walked, I heard at least one person say “she must really be in a hurry.”

Around yet another bend, I saw the overlooked “up high” place. A column of rock, undoubtedly not limestone, rose from the center of the garden pit. I knew there must be a steep staircase.

By the time I reached the top, my heart was pounding. The only exercise I had done on the ship for the past week was to run for second helpings of chocolate cake.

I spotted the bench. I turned over the rock. I found the soggy slip of paper. Chrissy had drawn a picture of a chicken and written the words “Hi Heather.”

Snap, snap. I took a picture.

I also knew that my friend Paul planned to take the same cruise to Alaska Aug. 4-14. I hid a note for him in case he visits the garden.

I had no time to be clever. My note reads “Hi Paul.”

The race back to the tour bus was even more harried. Now I was traveling in the opposite direction. I consoled myself in knowing I would never see these people again. I moved quickly, but I know I heard a few comments about the hurry I was in.

By the time I returned to the cruise ship that afternoon, I felt like I had earned that second piece of chocolate cake.

This entry was posted in Uncategorized and tagged Butchart Gardents, Scavenger hunt, Victoria. Bookmark the permalink.