I need to stop buying delicious and beautiful fruits and vegetables from the farmers market. I do this every year. I stroll while I’m hungry and end up with a fridge filled with really good eating intentions.

This season, I’ll also blame the cruise ship. During my family’s recent jaunt to Alaska, I consumed (quite possibly) tens of thousands of calories in the form of drizzled chocolate, toasted hazelnut and creamy coconut. After gorging night and day on treats, my body was so saturated with sugar, it’s a wonder ants did not find me in my sleep.

The day I disembarked, I craved spinach and antioxidant berries, and stocked up on zucchini, carrots and kale at the farmers market. For several days, I bought and ate healthful foods like my life depended on it.

Then the tomatoes in my garden spurted a big batch. Next, the seedless Thompson grapes were discovered along my cyclone fence.

On the cruise ship, I experimented with whether one could overdose on chocolate, meringue and lemon curd. (I lived). Can you OD on Vitamin C from fruits and vegetables? 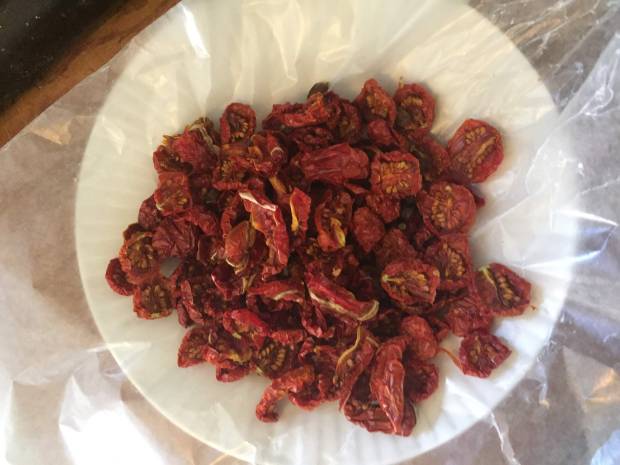 If I were a more generous person, I would have donated my excess produce to a local charity. Yet, this thought did not occur to me until I sat down to write this column.

When I brought some baskets of tomatoes to share with my mom, sister and niece, I ended up coming home with a big bag of ripe figs.

Next, I put a lot of thought into how to preserve all this summer overstock to overindulge later in the year.

Tomatoes and grapes are both candidates for freezing. In the past, I would wash grapes from my garden, freeze them in snack-sized plastic bags and add them to fruit smoothies.

Tomatoes can also be frozen (www.bhg.com/recipes/how-to/preserving-canning/how-to-freeze-tomatoes/) to use in marinara sauce in the winter. To prepare them for freezing, cut a cross in the skin (for peeling later), then dunk the fruit in a pan of boiling water for 1-2 minutes. Scoop them out quickly and place the red rubies in a bowl of ice water. Once they’re cool, you can easily slip off the peels and pack the tomatoes into freezer-friendly plastic bags.

However, it’s so hot right I doubt even Rachael Ray would bring water to a roiling broil if she lived in the Sacramento Valley.

These days, my air conditioner is burping and gurgling to keep up with the heat.

It’s so hot, I don’t want to run the washing machine and dryer. I would rather wear my clothes a second time and spray them with fabric freshener.

Despite the heat-induced brain fog, I remembered the food dehydrator I tucked away above the silent washing machine.

When I ran the extension cord out the dog door in the laundry room, I could run the dehydrator from the back porch. If possums came to nibble on the fruit overnight, they put the lid back. 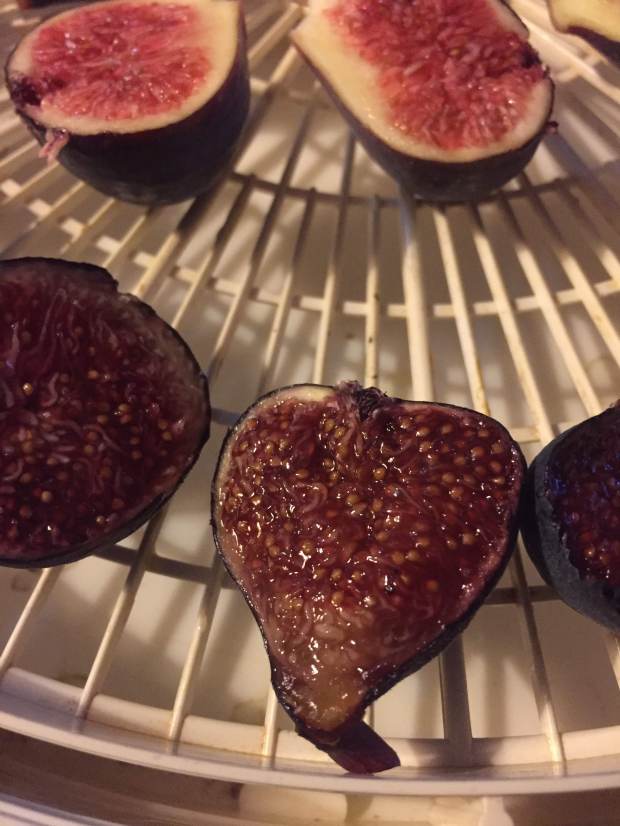 Now I have yet another dilemma: Can I keep from eating ridiculous amounts of super sweet Thompson raisins, dried “tomato candy?” and semi-moist figs?

Compared to ice cream, dried tomatoes are a calorie bargain (www.calorieking.com/us/en/foods/f/calories-in-fresh-or-dried-vegetables-sun-dried-tomatoes/oLWxrY79QIubABfRXBA6oA) at 139 calories a cup. Raisins pack more paunch at 433 calories a cup. However, just a few on my morning oatmeal probably won’t ruin me for my size 10 jeans. Dried figs are delicious when nibbled with a cup of coffee.

My guess is that dried tomatoes and raisins will be a big hit among my students, if I find it in my heart to share.