The mural of Robin Hood is almost hidden now along the northern perimeter of City Plaza. Scott Teeple painted the mural, using Greg Taylor as a muse. Both men are gone now but remain as part of Chico’s artistic history. (Heather Hacking — Contributed)

When I return home from traveling, it usually takes a week or two until the “vacation lens” disappears. As a tourist, even the fire hydrants are beautiful if they are painted a different color in a different town.

When I land my feet on familiar soil, my eyes stay at this same aperture, at least for a while, and I appreciate my own town all the more.

Another way to broaden your perspective in your own backyard is to cruise around with someone walking these steps for the first time.

This month, my friend Patrick asked me to play tour guide for his daughter, who is a recent resident of the Chico State University dorms. I met Patrick a million years ago when we both lived in a cheap-rent apartment complex. Back then, we were young, our world was new, and we had much better eyesight.

I dined with the whole family at a downtown restaurant. My college chum had already unfurled most of his Chico tips from 25 years ago, some of them still applicable. Now it was my turn to download the “old lady tips” I have gathered as a multi-decades resident of the Sacramento Valley.

His kid is on her own when it comes to navigating the hallways of Holt Hall and making friends in the residence hall. I was (somewhat helpful) as I showed her a tree-lined route to the grocery store and to help browse bargains at thrift stores. I know I helped, at least a little. We rode bikes around town for 2 ½ hours. I stopped about 50 times to point out yet another thing that I love about my selected surroundings.

She was 10 feet behind the rear tire of my bike, so if she protested, I didn’t notice.

I’m sure she could use Google to know all that she will need to know. She’s also welcome to call or text to ask “what’s that thing you said about that thing,” when she has idle time.

As a preparation for the tour, my friend Richard and I met up Friday night to watch the band “Hot Flash” downtown. The night was young, and my house was boiling hot. Rather than end the lovely night, we walked and talked. Lucky for him, I worked at the newspaper for 25 years and I know just a bit about a lot of things. 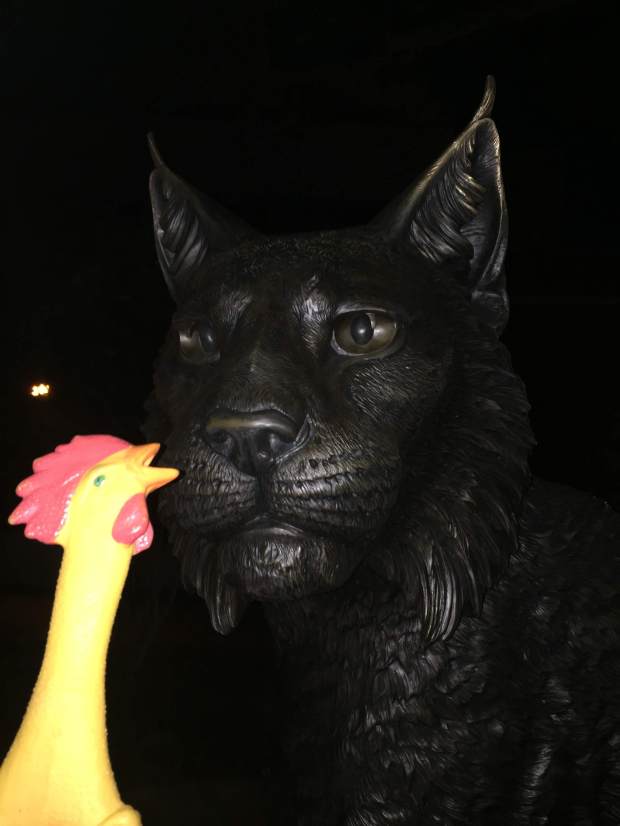 Richard had never really toured the campus, and at least pretended to take interest in all of those wonders I showed him that night. We touched the statue of the three sisters (www.csuchico.edu/fms/resources/campus-art/three-sisters.shtml) near the university Rose Garden. I disliked those solemn gals when I wrote about them for the university newspaper. Yet, now they’re part of my own history.

The landscaping at the campus is always inspiring, but easy to overlook when you’re on a schedule. With bright lighting on campus, we noted plumbago near Colusa Hall and the well-kept oleander bushes. Richard appreciated the creek that runs through campus, and I was a bit shocked he had never been there before. “Catalpa trees,” I pointed out, although by this time I think his brain was full.

Many stops were made to pose the rubber chicken in front of artistic landmarks.

On a roll, we meandered our way back to my bicycle, and I slipped in a mini-tour of the downtown murals (www.chicoer.com/2017/05/30/chico-downtown-art-walks-last-saturdays-through-october/), at least those murals that remain. It’s been years since I ran my fingers across Dayton Claudio’s (www.daytonclaudio.com/Public%20Art.html) mural on Salem Street or thoroughly inspected the art benches downtown. We pretended to open the mock door on John Pugh’s mural “Academe” (www.chicoer.com/2013/12/01/landmark-mural-at-chico-state-means-a-lot-to-community-as-well-as-the-artist/) and sought in vain to see the glass blowers in the window of Taylor Hall.

A few days later, when I rode around town with Patrick’s youngest daughter, I was ready to re-explore even more.

She plans to study biology. I rattled off a long list of things we could do – Llano Seco Wildlife Refuge, Dry Creek Preserve and several locales along the river. My guess is that she’ll make friends in the dorm. Her gift to me is that now I’m inspired to continue being a traveler right here and now.

This entry was posted in Uncategorized and tagged public art. Bookmark the permalink.