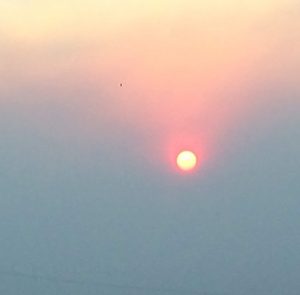 Autumn mornings are crisp and children on the playground aren’t necessarily noticing the beauty of the amber and golden leaves. In those few moments before school, kids are chasing each other around in small circles or giggling in even smaller circles.

A year ago, the bell rang and my third-grade students at a school in Chico created a somewhat disorderly line facing the glass doorway. My mind was not in the sky, but going over details of lessons-to-be.

In passing, I heard chatter in the hallway about a “fire near Oroville.” We could smell smoke in the air, but my focus was on teaching how to tell time on an analog clock. I checked my phone when children were working in small groups. Pulga. The fire was near Pulga. That was very far away.

Before teaching, I was a newspaper reporter. Every fire we heard on the police scanner was a potential call for action, but most fires are stamped out quickly. When you’ve worked the news beat for a few years, you begin to build your list of devastating fires – The Poe, Musty Buck, Swedes … As a writer, I helped share slices of those big stories, including interviews with people staying in shelters, folks searching for their pets and those fighting the fires. Over the years, we’ve watched in disbelief as the big news of local fires became huge news, including whole communities displaced in Clear Lake and Santa Rosa.

Yet, last year, Nov. 8, the first morning of the Camp Fire, I was a teacher. It wasn’t my job to race toward the flames. My children were safe in their seats, the fire was far away, and we were learning about the big hand and the little hand.

The children raced around outside during snack break. I met them at the blue line on the blacktop, where they gathered, somewhat orderly. Their cheeks were flush from the chill. As I faced them, my back to the south, I saw their wide eyes and frightened expressions. They saw the sky over my shoulder.

The sky! Gray and a deep orange, a monstrous mound of color that simply should not be in the sky.

When we reached our classroom, and settled into chairs, I gave an update with cool teacher-authority.

“I checked the news earlier today,” I said calmly. “That fire is far, far away from us.

I believed those words.

Yet, nothing was OK, and would not be for a long time.

“We need to focus on our work today, but let’s take a moment and think good thoughts for all of the people who might be really scared right now, those people who are close to the fire, and the animals as well.”

We did not know that right then, people were trapped in their cars with fire on both sides of the road.

Just a few hours later, we were working on multiple digit subtraction when a parent arrived at the door. She was there to take her son early — not home, but somewhere else. She lived in the fire zone and evacuations had begun. We didn’t know yet, but her house was one of the thousands that would be lost. Her family would live for months in an RV, parked in front of another classmate’s home.

It would be weeks before we returned to school. By then, the children knew that everything was not OK.

I can’t begin to share the many vignettes that occurred over the remainder of the school year. On the first day back, we gathered in a circle on the carpet near the bookshelves. We talked for more than an hour. There were times, months later, when children drew pictures of their homes, with relatives staying on couches or parked in trailers in the driveway. Some children needed quiet time at school, because there were few quiet spaces at home. And little by little, we learned triple digit addition and the difference between an adverb and an adjective.

This entry was posted in Uncategorized and tagged camp fire. Bookmark the permalink.