Nope, moving your toaster oven to the front porch to make pizza is not glamorous, but it’s a Chico survival skill. (Heather Hacking — Contributed)

July is the price we pay for living in amicable Northern California.

Most of the time, we have it pretty good. We’re a few minutes from the Sacramento River, a few hours from the mountains, and there are still places where you can let your dog run off-leash. Our towns have community events. When we attend these events we actually run into people we know.

Yet, in July it’s fairly easy to feel like living here is a mistake.

Some of those otherwise nice townfolk are cranky, or maybe it’s me. Anything left in the car will melt and nights are sweaty and sleepless. Once upon a time I would go to the grocery story merely to stand in front of an open door in the freezer section. Coronavirus has killed that thrill.

This is why civilized cultures have siestas. There’s no use in even pretending to function like a normal human being when our brains are about as slow-cooked as Gramma Dorothy’s pot roast. A nap in front of the air conditioner is about all the work that should be done from noon to two.

Yet, we stay because we’re in too much of a brain stupor to pack it up and leave. Plus, everyone knows it’s too hot to move in July.

And soon, fall arrives and memories of the summer of our discontent will fade. The gingko trees will turn an electric shade of yellow, catching those long, slanted rays of last light. Before we know it, we’re taking afternoon strolls in the neighborhood, waving at our neighbors as if we didn’t have a big fight that day when we were both hot and cranky.

I will not compare my sweat-filled, pandemic-impaired life to others. Thank you, Michelle, and David, and countless others who recently bragged on social media about their weekend excursions in Fort Bragg.

Going to the rugged beach town is almost a community event. Nearly every time I visit, usually in July, I run into another Chicoan wearing flip flops and cargo shorts as they snap photos for Facebook.

If we were not sheltering in place, I might be at Lake Almanor, which is the other place you’ll bump into people with Chico State license plate holders.

It’s July. We would rather be somewhere else. Yet, one month of unbearable heat is better than 365 days of horrendous Bay Area traffic.

If you’ve lived here long enough, you’ve learned a few survival trips. Here are a few from my war chest.

This week I had a solo version of a July barbecue. I had frozen pizza in the freezer, but there was no way I was going to turn on the oven indoors. I have a toaster oven, which I only use in July. Using an electrical cord, I baked half a pizza on the front porch.

Now I have room to freeze those peaches that were a gift from Dawna.

My dear friend Roger called last week. He’s funny. Rather than simply pick up the phone to say hello, he makes up an excuse to call, usually a plant-related question. This time he was wondering why his cucumbers weren’t producing.

“They’re wilted,” he said, sounding a bit wilted himself. “I’ve been watering them twice a day, and nothing seems to help.”

They’re wilting, dear Roger, because it’s so hot they want to die. Cucumbers, and other plants with big leaves may wilt during the day, just like humans. I told him to check them with a flashlight after the sun went down, and likely he would note they had perked up.

Of course, as soon as I told Roger this news, the cucumbers in my raised bed died. 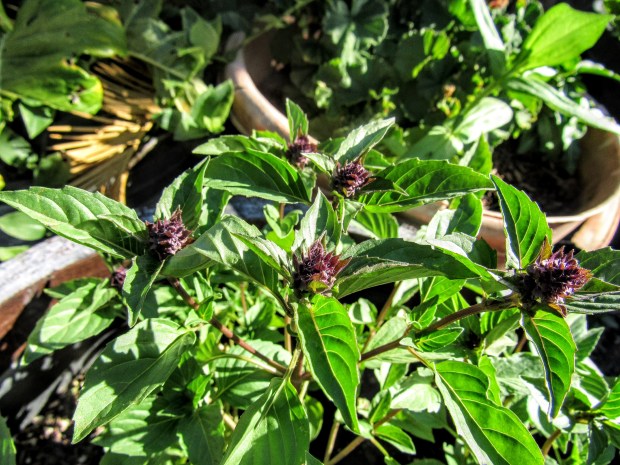 If your potted plants are looking beaten and disrespected this time of year, they may be trying to tell you something. They may be telling you they would rather die than spend another day in direct sun. Just because the gal at the nursery said the plants will survive the worst of Chico’s summer heat does not mean the plants actually prefer to be miserable.

This time of year, I try to remember to move my potted plants under one of those polymer sun shades.

You can also find the best places for sun-battered plants by checking where the stray cats nap in your yard. Chances are, your plants will prefer the shade vs. the Great Incineration.

Also, pay attention to plants in terra cotta. These faded orange pots are attractive, and they last a long time. Yet, they’re porous and the increased airflow allows the soil to dry more quickly. The air can help keep fungi and other plant boo-boos from populating the soil. Yet, I prefer plastic for most things except for cacti.

You can also find umpteen crafty ways to paint (and seal) terra cotta pots so they don’t dry quickly. However, that’s a project for any month other than July.