Zinnia blooms fade, but are still lovely and full of potential. The seeds can be scattered with hope that some will sprout next year.

Despite the heat, despite my reticence to water during the heat, some things are surviving and even thriving in the yard. The star of the garden this year is the tomato plant that found its way to a happy home along the cyclone fence.

This tomato happens to be the love child of the tomatoes I grew with my third-grade class two years ago. We planted seeds in January 2019, and the seedlings grew slowly through the cold months, protected in a greenhouse. I remember the day last summer when I picked an overly ripe, very large cherry tomato and tossed it toward the fence?

It was a fleeting wish, but I hoped some of those seeds would grow.

I discovered the seedling when it was already about six inches tall, and yanked at the nearby weeds that were trying to block out the sun. 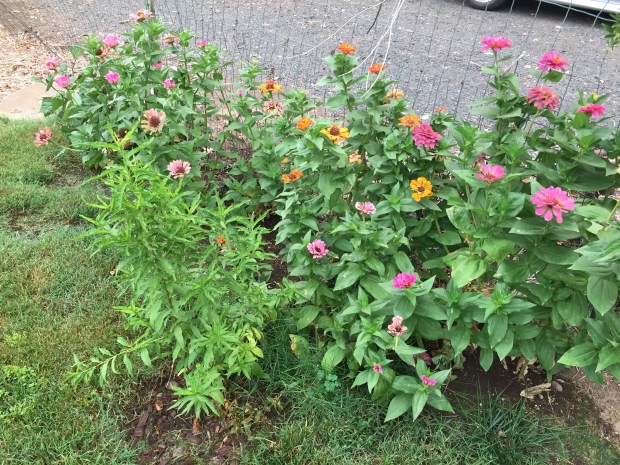 As our tomato plant grew, I inevitably thought of those third graders, who are now fifth graders, and thought that our day of planting seeds had a lasting impact on my life.

This plant not only grew, it thrived. I strapped it to the cyclone fence with some green garden tape. It grew through the fence. Now that I’m harvesting tomatoes, I have to exit my yard to grab the overly-large cherry tomatoes before they are snagged by a passerby.

At first, I thought this particular plant had achieved greatness because it is an important symbol of my love for my first class of children. That’s true of course.

Another factor is that this tomato plant is actually in the ground.

Years ago, I stopped planting tomatoes in the ground because gophers are a big problem in my neighborhood. Gophers are especially attracted to soft, moist soil. This results in underground devastation of anything you water regularly.

When the Handsome Woodsman was working on our garden, he created a raised bed with a black plastic truck bed liner filled with soil. One side is higher to allow drainage.

This works well to keep the gophers in frustration. However, the soil is only about 2 ½ feet deep. In the hot sun, the soil is also probably about as warm as the planet Mars.

I get plenty of tomatoes, but my plants don’t thrive in any way that would create envy among my neighbors.

My third-grade volunteer tomato plant has no boundary issues. It has grown to its lush glory because it was given everything that it needed. For some reason, the gophers did not choose to gobble it.

The end of the growing season is a good time to think about plants that have done well, and those that could easily be forgotten because they are dead.

I planted zinnias along the fence line and remembered why they are such a summer favorite. Zinnia seeds are easy to harvest. Simply allow the flowers to dry on the plants, then clip off the brown blooms. If I toss the flowers and make a wish, maybe I’ll get more surprises next year.

This entry was posted in Uncategorized and tagged tomatoes, zinnia. Bookmark the permalink.