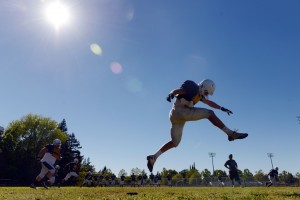 The season starts in full, not just for Chad Olsen, kicking off in a recent Pleasant Valley practice, but for all the teams that didn’t suit up in Week Zero last week. Photo by Jason Halley

It’s a real simple question: Where should you be on a Friday night? Well of course, the answer is a high school football game. But which one? Here’s what appears to be the front-runner for the Chico area. Of course, if you have ties to a certain school or a team by all means go to that one. But if your aim simply was to go to the best or most meaningful game, then here’s what your schedule should look like as the season begins.

Week 1, Sept. 6 – Pierce at Hamilton. Wouldn’t argue too much if someone nominated Lassen at Pleasant Valley as that’s an enticing matchup that will serve as a measuring stick to see where both programs are. But the Bears-Braves showdown will go a long way to seeing who’s stacking up as the top challenger to a Willows’ three-peat. Pierce went undefeated last year in the regular season and was No. 1 for D-III. But Willows got the best of the Bears in overtime 3-0 thanks to a goal-line stand. Hamilton also gave the Honkers nearly everything they could handle in a one-point thriller of a section final. Hamilton is thin in returning starters, but who they do have makes up for what its lacks quantity with quality led by Andrew Shippelhoute. This should be a good one. And if you have never treated yourself to a football game at Hamilton High, then you’re missing out. It’s the right feel of small-town football done right.

Week 2, Sept. 13 – Central Valley at Orland. This could decide who is the more serious challenger to breaking up the presumptive rematch for the Northern Section Division II final that’s been thought by many to be West Valley and Sutter. This CV-Orland meeting could at least decide who will be the lead dog for the No. 3 seed at worse in D-II. CV had some injuries in its opener, a rough 48-17 loss to River Valley in a game that was close at halftime. Orland opens with a road game at Anderson on Friday. Orland is another small-town atmosphere done right for football. The Trojans are a hard-hitting group. CV is a group that seems to relish taking hard hits while finding a way to keep moving forward. Could be one of the better matchups.

Week 3, Sept. 20 – Hamilton at Durham. With apologies to Willows at Orland, which is known as the Battle for the Ax, a longstanding rivalry, this other game should be much more competitive. In recent years, the Battle for the Ax has been simply one of the best in D-II beating up on one of the best in D-III. But Hamilton-Durham features a pair of D-III teams who love to duke it out against one another. Hamilton got the best of Durham last year, and that started the Braves’ big season.

Week 4, Sept. 27 -  Las Plumas vs. Oroville. Those who aren’t familiar with these teams might scoff at the notion of this being the game to see this week what with Pleasant Valley and Paradise facing off or Chico hosting Central Valley in a matchup of Panthers’ defensive coordinator Mike Miller’s current team and one of his former, but trust someone who has been to what’s known as the Victory Bell game the past three years. This game means EVERYTHING to the players. And yes, I hear you, that’s because for a while that’s the only victory guaranteed for either team. But it’s a season wrapped up in one evening. Everything on the line. It has a championship feel. Because it means everything to each side. The victors at the final horn’s sound sprint to the bell to get it. It’s like seeing 30 or so little kids head to the tree on Christmas morning. Last year, even first-year coach Dave Morris had the wide-eyed look after his Thunderbirds won. Why? Because when the LP alum was in school, he never got to touch the bell because LP never won it during his playing days.

Week 5, Oct. 4 - Sutter at Orland. With big, big apologies to Enterprise at Chico and Willows at Hamilton. If the D-II final isn’t going to be a rematch, then here will be it’s first sign. If the Trojans knock off the Huskies, then Orland will have the inside the track for a top-2 seed in D-II. These two teams have turned in some slugfests the past two seasons as they each won a section title in the process. Two years ago, Orland beat Sutter in the regular-season finale to secure the No. 1 seed, which meant what became the eventual rematch in the championship was yet again at Trojan Stadium. Last year, Sutter won the regular-season tilt and then got to host Orland in a semifinal, eventually won by Sutter on a wet, slick field at home. Orland led 6-0 before a couple of mistakes led to a 14-6 season-ending loss. Wouldn’t be surprised if that result has been burned into the brains of those seniors on the Trojans’ squad. Willows at Hamilton is a rematch at the site of last year’s D-III final won by Willows by a point. Should be a good one, but Willows returns a lot more from that game. Enterprise-Chico has been an offensive explosion the past couple of years. But the Hornets aren’t exactly the Panthers’ rivals. That’s Pleasant Valley and strongly behind the Vikings is Paradise.  Those are the two teams Chico really seems to channel their extra attention toward.

Week 6, Oct. 11 - Paradise at Enterprise. Duh. These two teams played two epic games last season with the Bobcats winning in overtime in the regular-season meeting at Om Wraith Field, but the Hornets pulled out the win on their home field in the D-I final. Both games were decided by a point. This matchup could go a long way to deciding who earns the No. 1 seed for the D-I playoffs and the home-field advantage that goes with it. It will be an interesting case of strength vs. strength. Paradise running back Jonathan Dixon is a big, big bruising back and the Bobcats have burly center Caleb Anderson and sizable tackle Daniel Garcia paving the way for him. Enterprise, though, return seven of its front eight on defense from a season ago. Dixon and Co. got the best of them, but the Hornets found a way to win. The encore should be just as good.

Week 7, Oct. 18 -  Chico at Paradise. This game needed two overtimes last season as Chico won by a point. This has been the measuring stick game for the Panthers as they see Paradise as the team to beat if they’re serious about making a push for a section championship. The last two regular-season meetings have been amazing games to watch. This one could be no different.

Week 8, Oct. 25 – Pick ’em. Pleasant Valley at Red Bluff. Foothill at Chico. Paradise at Shasta. This one is a three-way horse race, and it’s a close one. All six teams figure to be fighting for either playoff positioning or postseason berths. For PV-RB, the winner likely gets a seat at the big-boy table and gains entry, or at least, a big jump over the other for a playoff spot. Last year, Red Bluff won at PV and that seemed to jump-start the Spartans’ late push that included a win against Paradise. A win for PV, and the Vikings might be able to think playoffs for the first time in three seasons. For Foothill at Chico, this has belonged to Foothill of late. Last year, Chico coming off the win against Paradise, couldn’t find nearly enough focus to do much against Foothill. It’s like what Mike said in “Breaking Bad.” “Just because you shot Jesse James, don’t make you Jesse James.” The Panthers got one over on the best the section had to offer in Paradise, but that didn’t mean anything the next week. Paradise at Shasta has usually meant one of two things. A big blowout victory for the Bobcats if the game is at Om Wraith Field or a nail-biter of game usually in favor of the Wolves if the game is up at Thompson Field. This year, Shasta has some big linemen ready to take on Paradise.

Week 9, Nov. 1 - Chico vs. Pleasant Valley at Chico State’s University Stadium. You expected something else other than the Almond Bowl?

Week 10, Nov. 8 – Shasta at Chico. With apologies to Pierce at Willows, which could be for the top seed in D-III. For entertainment value, the Shasta-Chico matchup has not disappointed. In 2011, these two played to a rare offensive output that saw Trevon Reid and company set some section records that included 523 yards of total offense from the dual-threat QB and plenty of points in a 56-48 Chico win. The two teams finished with 1,199 yards of offense, a section mark. In last season’s playoff matchup, Chico held on for a 57-42 victory. Points are plentiful in these matchups. Can they meet in the regular-season finale only to play the next week in the playoffs’ first round for a FOURTH straight season?