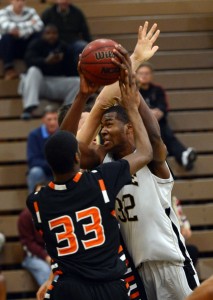 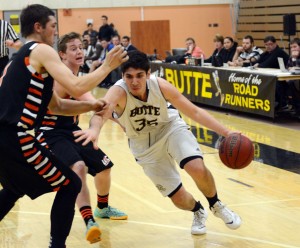 Depending on how it looked at it, the Butte College men’s basketball team either had an awesome opportunity or one big problem Wednesday night.

The Roadrunners opened Golden Valley Conference play against the team many see as the preseason favorite to claim the GVC crown with Lassen.

The Cougars entered Cowan Gym with a state ranking of 18th in the Jan. 6 poll by the California Community College Men’s Basketball Coaches Association and 10th in Northern California.

With the entire conference schedule all of 10 games, an 0-1 start in GVC home contests doesn’t leave much margin for error if the Roadrunners wanted to keep designs on their own GVC title.

Well, the Roadrunners nearly ran the Cougars out of Cowan Gym in the first half and the early part of the second before Lassen came close to pulling even a few times in what became a harried 99-88 victory for Butte.

Let’s take a deeper look at the game, and if you want to see it in pictures, take a gander at photographer Jason Halley’s photo gallery, which you can find on the Chico Enterprise-Record’s website.

8:00: Lassen leaves Butte guard Jud Sailsbery all alone on the right wing, and the Orland High grad makes the Cougars pay when the ball gets to him. He drains a 3 for a 27-15 Butte lead. This was part of a bit of an exchange between the teams. Lassen’s Meshawn Beard rattles home a 3 only to see Gavard answer with another 3. But Lawrence Otis hits a 3 with 4:50 left in the half, keeping the Cougars within striking distance at 34-25.

But a few bonus trips to the free-throw line and some good ball movement by Butte to finish the first half left Butte ahead 44-30 at the break with baskets from Jamaal Davis and Arthur Caldwell and Sailsbery providing the assist.

14:25 left in second half: Lassen chips away at the margin as Butte’s offense dries up as Marvin White makes a 3, and he then converts a three-point play. Shortly after, Lassen gets to within 59-50 on L.J. Melton’s basket, but a technical foul for delay of game proves costly. as Nikolas Petruk makes both. Arthur Caldwell also makes two free throws with 12:42 left for a 63-50 Butte lead.

10:04: Again, Lassen draws near at 67-57. But Cougars coach Devin Aye is whistled for a technical foul for arguing a no-call on Lassen’s offensive end of the floor and then a foul that was called after Butte’s Davis attempted a 3. Again, Petruk, a San Paulo, Brazil, native, sinks two free throws. Then Davis makes all three of his tries. The last of which makes it 72-57 Butte with 10:04 left.

9:08: But Lassen goes on a 6-0 run from the free-throw fest from Butte and 9:08 left (58 seconds) thanks to Butte not handling the press, turning the ball over and turning it over quickly.

5:22: After getting to within 76-70, Lassen’s Beard fouls out, and Sailsbery makes both free throws.

1:39: White makes a 3 as Lassen now within 87-83. Roadrunners counter with Sailsbery assisting a Caldwell basket for a crucial six-point margin at 89-83.

:58.3: Sailsbery makes both free throws at 91-85, a fitting finish as the difference came at the line. Otis makes 3 after this to get Lassen within 3 at 91-88, but Caldwell again has a basket. Then Sailsbery hits two more free throws at 95-88 with a little more than 30 seconds left.

Lassen’s third and final technical foul, this one with 18.2 seconds left means Butte can start thinking about the next game.

Butte extended its win streak to five games, leaving the Roadrunners at 11-7 overall and of course 1-0 in the GVC. This has to be a bit of a confidence-builder for the Roadrunners after they dropped a number of games earlier in the season despite holding halftime leads.

But it wasn’t exactly a smooth ride to the end. Lassen pressed Butte, and the Roadrunners looked flummoxed, failing basically to get the ball past halfcourt on three straight possessions. The Roadrunners should expect a heavy dose of the press when they visit Susanville on Feb. 8.

The Roadrunners sure would prefer to get plenty of practice at holding onto leads.

Still, preserving a victory still counts as this was at least a big step in finding a way to weather the enviable storm. Butte did it by getting a handle on its press offense, something coach Russ Critchfield said had been very good prior to Wednesday’s game, and making its free throws.

It helped that Butte has excellent ball handlers in guards Sailsbery and Davis. The problem came when some of the Roadrunners’ big men tried to match the pace or tempo that Lassen was trying to induce by speeding the game up to fifth gear. Butte’s big men didn’t slow it down and instead didn’t seem completely sure what they were going to do before they got the ball in their hands. Especially when they put the ball on the floor.

Additionally, perhaps the anointing of Lassen as the conference favorite is a bit premature. The Cougars’ tailspin has continued into GVC play. Lassen (13-10, 0-1 GVC) has lost five of its past eight.

Lassen also didn’t keep its cool with three technical fouls, one for delay of game, one on the coach and another on a player. Take those away, and the outcome or at least the run-up to it could have been vastly different.

The win provides some interesting options for the upcoming schedule.

Butte goes on the road, first a Saturday night date with Siskiyous in Weed then a Wednesday matchup in Redding against rival Shasta. Neither is a gimme.

If the Roadrunners go 0-2 in those games, not all is lost, not like it would be if they were 0-3. But certainly a 1-2 GVC beginning isn’t what any Roadrunner wants.

Go 1-1 and that leaves Butte at 2-1 in the GVC, and leaves it squarely in the running for the GVC crown.

Win both? Well, then maybe the presumed GVC frontrunner shouldn’t be Lassen, but the Roadrunners.

Butte next plays at home Saturday, Jan. 18 against Redwoods. The Roadrunners play at 2 p.m. after the women start the twin bill with a noon contest.

Sports Writer for the Chico Enterprise-Record and Oroville Mercury-Register. Contact me at jshufelberger@chicoer.com or (530) 896-7774. Note, I am out of the office twice a week (generally Sundays and Mondays) and sometimes out on assignment so I may not get back to you right away.
View all posts by Joseph Shufelberger →
This entry was posted in Uncategorized and tagged Arthur Caldwell, Jamaal Davis, Jud Sailsbery, Justin Gavard, Russ Critchfield. Bookmark the permalink.