I was seeing a shrink while going through a breakup with a lady that I wanted to stay with and my shrink asked me what the problem was.

“Well, I love the lady and she doesn’t want to stay with me. That’s the problem.”

“She doesn’t want to stay with you and you love her?”

“Why would you want to stay with someone who doesn’t want to be with you?”

“I guess that’s a good question and I guess I don’t really know the answer.”

“Well, I’ve been with her for a couple of years now and I’ve been though a lot of losses in my life and I don’t want to go through another loss.”

“What losses have you been though?”

“I put my first child up for adoption when I was very young. That was after my first girlfriend was raped and murdered a couple of years before that.”

“That’s not all. My best friend was killed a couple years later.”

“Then a few years later my mom died and 4 months later my dad died.”

“That’s not all. I went though a divorce when my son was 2 years old.”

“Ahhh…Well, ah, let’s see. It might be easier to say what I don’t like about her. I don’t like how she’s always mean to me or how she’s got to always be right and she always has to have her way and always criticize me.”

“Yeah, okay. Nobody likes that but I asked you want do you like about her?”

“Okay, well, let’s see, she’s pretty and….well,  she did come after me even though I was seeing other ladies at the time but then I stopped seeing those ladies and started seeing only her.”

“Okay, so what do you like about her now?”

“And you really want to stay with her just because she’s pretty smart?”

“Well, no, that’s not the only reason although, my mother says that as soon as she finishes college, she’s going to get a job, get a new car, get a new place to live and find a new boyfriend.”

“And what do you think of that?”

My shrink looked at me, nodded his head and said, Sound like what you need is a quality control check list so that next time you choose a lady, you know you’re getting what you want.”

“Yeah, what do you want in a lady besides her looking good.”

“Good. And what else? Remember I asked you for 5 things.”

“Okay, what else, huh? Well, ahh… I want a lady who is nice and has a sense of humor and is playful and doesn’t always have to be right.”

“Okay, that’s 5 things you want. So write them down and make a list of 5 things that are deal breakers.”

“Yeah, what you can’t deal with. Like can you deal with a Nazi chick even if she’s attractive and sexy?”

“Haha, no! I couldn’t deal with a Nazi chick or a biker babe or an anti-Semite although sometimes it feels like I have been.”

“Well, I’ve been with women who always seem to have to be right and always have their way. That’s a deal breaker.”

“Too serious ladies. I don’t want that. I need a lady who doesn’t take herself too seriously.”

“Alright. That’s a couple more things. What other deal breakers do you have?”

“A lady who is controlling. I don’t like that either.”

“Okay. Time is up for today. For next week, I want you to come to our session with a quality control checklist. 5 things you need and 5 things that a deal breakers.”

I spent the next week writing down what I wanted in a relationship and what I didn’t want in a relationship. I realized that my quality control checklist had been two things; that they’re attractive and they like me. That was pretty much it and it had gotten me in a lot of trouble over the years with women who weren’t good to me.

My shrink’s advice stuck with me and I’ve used it many times over the years since then by writing down my quality control checklist for more things than making a decision how to choose a lady.

A few years later one of my children was struggling trying to make a decision about keeping or quitting a job and I told him about my quality control checklist.

This is what I said and then I wrote it down and sent it to him in a letter:

The way I usually go about trying to make a decision is by writing down what I call a “positive and negative list.” I also call it “The Plus and Minus Game.” I list everything I can think of about what I’m trying to decide upon and then give each one of them a score of one to ten.

I make two columns and put a + on one side and a – on the other side and then I decide a score for each item I wrote down from one to ten.

I call this my “quality control checklist. I write down all the pluses and all the minuses I can think making a change or not making a change. I’ve done this often with things such as staying in a relationship, buying a house or selling a house, making a move, etc.

Here’s an example I might use trying to make a decision at keeping a job I don’t really like:

3)     Don’t have to think about doing something else or maybe making a mistake leaving a good job. 5

Then you make a column for the negative side:

5)     Kept from finding something more satisfying and rewarding. 10

Then I would give each item a score from one to ten. That’s fairly easy, such as decent pay is a 10. Steady job might be a 8. Don’t have to think about doing something else, maybe a 5, etc.

For the negative, you do the same thing, such as:

3) Have to deal with the public: Negative 10

5) Kept from finding something better: negative 10

Then you make sure you’ve considered everything involving making the decision and have been fair in scoring each item.

Then you give yourself enough time to have thought everything over about the decision. Give yourself as much time as it might take. Give yourself a few days if you have the time. At least one or two days and then come back to your quality control checklist and try to be objective as possible as if you were helping someone else make the decision.

Then add them up again and include anything you may have forgotten and see what you have.

This works a lot better for me than just trying to keep everything straight in my head until I get a headache and just say the hell with it and wait until I can’t stand it anymore and just do whatever comes out at the last moment when I have to make a decision and haven’t really thought things out enough to be fair to myself in making a decision.

I’ve done this in making decisions about making a big purchase like buying a house or moving away or staying in a relationship. It usually helps make the abstract more concrete and therefore easier to make the decision or at least see it more clearly.

This has worked for me and I use it in every decision I’m struggling with. I hope it helps you too.

Oh, by the way, the lady I was talking to my shrink about not wanting to lose,  just like my mother said she would, the month after she finished school, she got a new job, got a new place to live, bought a new car and found a new boyfriend but it turned out for the best. I found someone who treats me a whole lot better. 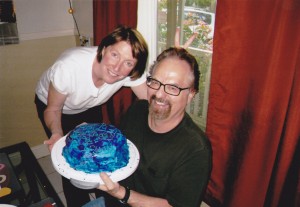 Phil & Sweet Lady T with birthday cake made by my daughters for our birthdays, May, 2013.