I’d lost people I’ve loved before and it was very difficult and painful to know that I wouldn’t be seeing them regularly again or possibly at all in the case of a break up and in the case of death, I’d never see them again for the rest of my life – but losing my mom and my dad was completely different.

As I reached the age I remember my parents being, I began to understand them better than I ever did while they were alive.

My parents got married relatively late in life compared to the age other people at the time were getting married. They married at about 30 and were in their 40s when I was the last born of 4 children, so compared to my friends’ parents, my parents had a good 20 years on them. So they seemed old by the time I was a teenager.

At 9 years old I was sent to summer camp (not my choice) with my older brother Richard for 2 weeks and I was very homesick. Going to camp was probably more for my mom’s sake to get a break from us kids than it was for me to go and it was the longest 2 weeks of my life up until that time. They treated us like we were in the army, wake up at the crack of dawn, go for a run and do exercise like jumping jacks and pushups for an hour, eat food I didn’t like, go for an all day hike up what they called “Pikes Peak”, camp out in the cold and swim in the ice cold water and take an ice cold shower that was so cold that it that took my breath away and that had no sprinkler head, only  forceful water coming out of a water pipe. That was supposed to be fun?

10 years later, at 19, I was drafted and sent to the army for 2 years including a year in Vietnam. That was, without doubt, the longest year of my life. I got home at 21 years old. Oh but coming home again was so good. But I left home again at 26 years old, moving 500 miles away to Chico from my home in LA, thinking that I could always go home again if/when the time was right.

Next thing I knew I had children and a job and a business so I was too busy to get home very often, maybe a couple of times a year as it was a 1,000 miles round trip drive from Chico to LA but I always thought I could just go at another time.

But you know how time is, it moves along whether you’re ready for it to or not. So time moved along and everybody got older including my parents. When I got to LA to see them they looked older and more fragile than the last time I saw them but they still were my parents and I’d always had them there, so I guess I never really thought of what it might be like for them to be gone.

Even when my parents got sick or went to the hospital or had birthdays in the higher numbers, I couldn’t fathom what it would be like for them not to be there to call on the phone or be able to make the 8 hour drive down to LA to see them, talk to them, hug and kiss them.

But then the phone call from my mom came telling me her cancer came back 5 years after she first got it the first time and that the doctors said she only had a few weeks left to live. Suddenly the thought of my mom not being there for me to talk to on the phone or go to visit in person began to seep in, although I still could not really fathom what it was going to be like.

The few weeks flew by and suddenly my mom was gone. But…but…but… what about the person I knew all my life as my mother to talk to about all my problems and my struggles and my hopes and dreams?

It took a while for the reality to sink  in and the next thing I knew, 4 months later, I got another phone call. This one from my oldest brother, Bob, telling me my dad had passed away that night.

But..but…but… What, how, who am I supposed to talk about every and anything who has known me all my life? How could I ever go home again?

And my mom? What did she feel about any and everything? I remember talking to my mom about how frustrating it was dealing with my dad being so different from her. My dad had to quit school in the 6th grade to raise his four younger siblings because his dad went back to Russia to visit his family he left behind when he came to America but since he came here illegally, he did not have a US passport so even though he had 5 kids in America, he was not a US citizen so he couldn’t leave Russia again and he wound up dying in a concentration camp along with millions of other Jewish people.

So my mom and my dad had a completely different outlook about life and the world and that caused serious problems between them. They fought all the time. My dad didn’t care what people thought. My mom did. Both my mom and dad worked full time. My mom was a clerk in downtown LA. My dad was a hard working man, sometimes working three jobs to provide for his family.

One time while I was visiting my parents in LA and I heard them fighting like they always did and I saw how stressful it was for my mom, I looked in the phone book and called up a shrink in Pasadena and told the shrink the problem my mom was having. The shrink said she thought she could help my mom.  When I told my mom about the phone call my mom said, “I don’t want to talk to some man about my marriage.” I said, “It’s a women.” All my mom said was, “Oh…” and she never called her.

But, but, but… what about me realizing all the things I now realize about my mom and my dad? I want to talk to them and show them how I now understand who they were and what they were feeling. I understand how they did everything they could for their children. I understand that they knew more about life than I did even though I didn’t realize it while they were alive. I understand how they tried to tell me not to make some of the mistakes and bad decisions they saw me making but I wouldn’t listen. I thought I knew better.

Some people say my parents are looking down at me now and smiling. I look up and I don’t see them but I do feel them in my bones and in my heart and I want to thank them for giving me everything I have today, the life I live everyday, the people who I love and care about and who love and care about me, my children and my memories of you. Thank you for everything. You were wonderful to me. 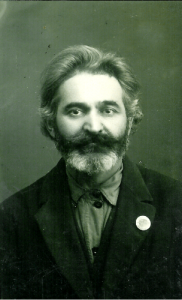 My dad’s dad who I never met. 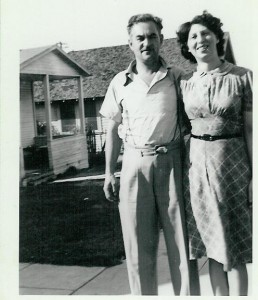 My dad and my mom.