My Dad and the Hell’s Angels

I was a kid maybe 7 or 8 years old. I was on vacation with my mom and dad and my older brother Richard in the high desert outside of LA. We went to a place called Lake Elsinore where we stayed at the lake for a few days and I played in the water and got so sun burned that I had huge, high, one inch blisters on my back from being in the sun all day long. This was before anybody ever heard of sunblock. I remember my dad popping the blisters with a pin and water pouring out of them. Then he put vinegar on my burning back saying that will make it all better. But it sure didn’t feel all better.

I was proud of my dad. He wasn’t afraid of anything. He was a strong man and what was called a health nut. He was a vegetarian. He didn’t eat meat or white bread or any junk food and he didn’t want us to either. He lifted weights and loved running on the beach and swimming in the ocean and he loved to put on the boxing gloves and box my two oldest brothers and their friends who were all young bucks and he’d never lose.

We’d been at Lake Elsinore for a week and my mom and dad had to get back to work so we were driving back home on some country road when a bunch of Hell’s Angels with all their insignias on their vests and some mean looks on their faces rode up behind us and got on both sides of our car with their very loud mufflers and they began taunting my dad who was driving his old 1941 Plymouth. My dad began slowing down and I thought, okay, you dumb guys, you’re messing with the wrong guy here. My dad is going to beat you up real bad – but my mom said, “Don’t stop. We got the kids in the car and there are too many of them.”

The bikers were yelling at my dad and giving him some mean looks and I was excitedly waiting for my dad to stop and beat them all up — but my dad just looked straight ahead and didn’t say anything – but you could tell he sure was thinking something.

I was disappointed because I thought the bikers needed to learn a lesson but I guess my dad had more sense than that and the bikers just passed us up and went looking someplace else to make some other poor people scared and – help some other little kid in the back seat of his daddy’s car learn when it’s a good idea to just let it go, keep your mouth shut and not do anything stupid. 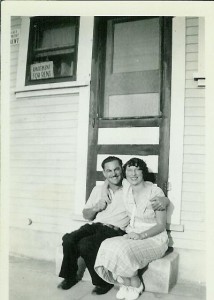 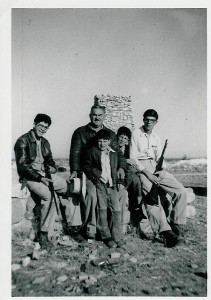 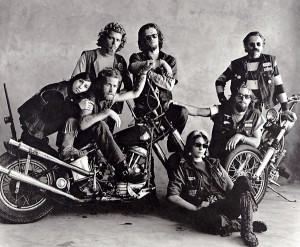