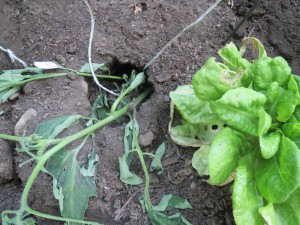 Yep. The gopher is back, or at least the kin of last year’s gopher, and perhaps the grand-kin of the gopher before that.
My neighborhood must harbor an underground gopher incubation unit, where gophers are produced as prolifically as feral cats.
Come to think of it, the gopher problem had decreased several years ago when my neighborhood was filled with fertile feral cats. Yet, being the do-gooder that I am, I trapped a bunch of the strays and took them to the Humane Society.
People who have read this column for a few years may recall that gophers and my garden are nothing new. I’ve tried the hose, chewing gum, dirty dog hair, rancid fish, pet feces and plugging holes with bricks. Once a friend attached a hose to his tail pipe and idled his car in my driveway while we talked about the world’s problems.
Then I graduated to the raised bed, with a metal mesh lining to create a no-trespassing zone.
This kept the gophers away for one year, but now a ravenous rodent has returned.
My guess is that he crawled through a small entryway to the raised bed, and then got so fat he can’t crawl back out. He’s now using my raised bed as a condominium.
The feeding cycle seems to be every two days. The first plant casualty was an entire head of loose-leaf lettuce. The hole was backfilled, as if the gopher thought I wouldn’t notice.
Two days later, a second bald spot appeared.
I borrowed a heinous looking trap from a friend, which was no small feat to bury in the ground without deactivating the spring. 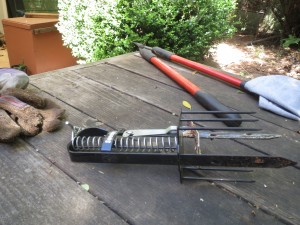 But the trap remains untouched and two more plants have vanished.
The loss of the tomato plants was the most disheartening. One plant already had small, green fruit. The plants were so big the gopher couldn’t pull them under the ground; the lifeless leaves remained on the soil until the next day when he gave the plant a final tug.
Now, I have borrowed a noise-maker, powered by three D batteries. An annoying sound is made about every 30 seconds.
Several small squash plants, grown from seed, remain in the raised bed. I’m hoping the gopher takes a hike before he learns to make earplugs from mud.
My friend Tom also suggested I dig up the entire raised bed and repair any gaps in the metal mesh. Bonus if I am able to find the critter. 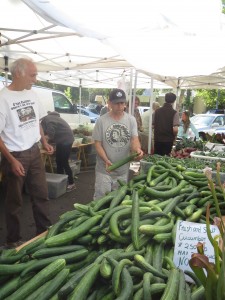 Moving on, buying from the pros
The really good news is that I can be perfectly happy despite my unwanted yard guest.
Bruce Balgooyen and James Brock invited me to chat at the Saturday farmers market, where they sell veggies grown at their Riparia Farm.
This was a few weeks ago and they already had summer vegetables, including a table stacked several feet high with crisp cucumbers.
Last week I went to the market later in the morning and they had just sold their entire first batch of tomatoes.
These guys are pros, and apparently undaunted by gophers. I have full confidence the summer will be filled with salsa.