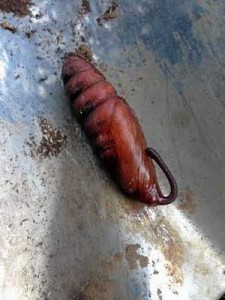 The good ones are usually taken. I wrote a note on a kitty collar, hoping no one would respond. Heather Hacking — Enterprise-Record
My hopes for a new addition to the family have been officially shattered. However, I have gained a new friend with no strings attached.

Last Sunday I had a great time with the neighborhood tabby. We frolicked in my yard, her gentle footsteps following me as I yanked weeds and sifted through containers of soil. Occasionally I gave her a pat and when she wanted more she rolled over on her back inviting me to rub her tummy.

Night fell and she sat outside the screen door expectantly.

This was it. I could no longer contain myself. If the weather was turning cold, surely this creature would prefer to be inside at night. We would sit and watch movies and snuggle when I was sad or lonely …

I had to know: Did she belong to another?

My next move had been plotted over the previous several months.

A cheap plastic collar was purchased at the dollar store, right before they closed at 10 p.m.

“I’m considering adopting this cat,” I wrote with a Sharpie on one side of the neon pink collar. “Does this cat belong to someone?”

I also included my phone number.

The woman who left a voicemail the next morning did not sound pleased.

I can understand. If someone was trying to woo my cat away, I would be firm but fair.

She said she and the cat had been together for 10 years and I should visit the Butte Humane Society.

When I called back, the chat was amicable. I thanked her for giving me a call, and said she was lucky to have such a nice cat.

In some ways, it’s better this way. The cat has returned almost daily. Yet, I won’t need to spend money on cat food, flea control nor to worry about a pet when I go on vacation.

I was a weed-yanking fool last weekend.

Sometime between July and November a robust stand of mallow found its way into dry cracks of earth.

We’re in the middle of a drought and I just moved to this new house in mid-summer.

One day while heading out to the newly-established compost bin I noticed that mallow had taken over.

I might be wrong about the exact name of the weed. The closest I could find on the University of California Integrated Pest Management website is “little mallow,” (http://goo.gl/1SvwG4). The leaves on my plants are not “little,” nor are the roots.

In fact, these roots are prize fighters. Before the rains, I yanked and grunted, but only managed to snap off the top greenery.

After the rains, I filled up a 13-gallon bucket with weeds and roots.

Next, while the kitty circled at my feet, I emptied the five and 10-gallon containers where the tomatoes floundered all summer.

A 10-gallon bucket contains a lot of soil, and good soil is not cheap. When I shoveled out the soil into a wheelbarrow, I scared the cat at my feet by screaming.

I know what a tomato hornworm pupae looks like and still I was caught off guard.

In case you’ve never spotted them before, hornworm pupae are burnt brown/burgundy in color, about an inch and a half long. They look a bit leathery, or what you would imagine a child’s finger would look like if it was slow roasted over a barbecue pit.

By the time I emptied all the soil, four pupae were found. If they had lived, they would have turned into sphinx moth, a lovely moth about four-inches wide. However, these creatures also lay eggs that later turn into hideous, green, gobbling worm machines.

My boyfriend has also warned me never to scream like that unless it’s a real emergency.