For several weeks I had been infatuated with a neighborhood kitty, only to have my heart shattered when she showed up wearing a flea collar.

I would be a bad person if I continued to woo her with wet food; The family that adopted her has children.

The things is, a few days later the cat showed up in my yard without a collar.

In my fantasy, the cat had somehow shimmied out of the flea collar so we could be together.

I imagined that kind-hearted people throughout the neighborhood offer her food. Yet, among those options she felt most comfortable at MY house, under MY mimosa tree. She had found ME from among the many arms willing to hold her.

But the image of her wearing a flea collar lingered in my mind.

Surely the family down the street had strong feelings when they placed their flea-collar claim.

Why is finding a pet partner so complicated?

My boyfriend sent me a curve ball by saying there were at least two, possibly three nearly-identical cats in the neighborhood.

What? I thought he was surely full of kitty litter.

Thinking back, I recall seeing two cats off in the distance when I first moved in. Could my new friend really be two or maybe three different cats? I’ve spent some time looking into those soulful green eyes. The cat I’ve been hanging out with has orange-tinged tabby stripes and lets me know when I’m scratching her favorite spot.

Am I the one who is fickle? Does that make me the type of girl who gets into heavy petting based on appearances? 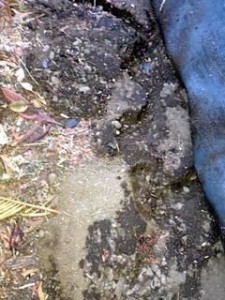 In the meantime, I’m going to do some thinking and hope that some of these cats get to work around the yard.

As loyal readers recall, I moved to the house directly next door to the cottage where I lived for 18 years.

The old house had a ridiculous problem with gophers and moles.

I would complain the clan followed me next door. However, I’m fairly confident all of the moles and gophers in this neighborhood are first cousins.

I hope you’re seeing the connection here. The next cat I fall in love with really needs to love catching gophers and moles.

The little walk from my car to my new front door is dusty. I put down an industrial-type piece of gray carpet, lined with plastic.

Businesses use this type of carpet to avoid lawsuits.

The first three times I stumbled I thought I was carrying too much baggage home from work. On closer inspection the carpet had turned lumpy.

Under the carpet I discovered intricate, curved tunnels of one busy mole, fully exposed.

Other parts of the yard are equally hazardous to the ankles.

You see now why I really need a cat. Or maybe two cats in the yard. Then everything will be easy.

For the University of California pamphlet all about moles: http://goo.gl/x7pNcx

For more than you need to know about gophers: http://goo.gl/vLxEEW