Planting a cactus garden was worth the wait , September 18, 2014

Author: Heather Hacking hhacking@chicoer.com @HeatherHacking on Twitter
In college I moved about every six months. Looking back, I can see I had a problem with restlessness. A few times I didn’t like my roommates, or they didn’t pay the bills or they were on drugs. One year I decided on a whim to move to Southern California to learn Italian and late-night coffee shop culture. Next on the agenda was Europe, simply so I could say I had traveled, and partially to justify learning Italian. 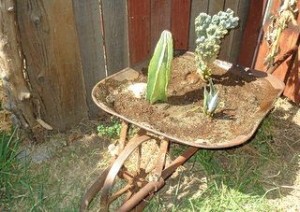 Moving could be a spur-of the moment decision when I had my whole life ahead of me.

My home furnishings included a four-inch thick futon that could be shoved behind the car’s passenger seat. My shelving unit was two plastic milk crates and a 2-by-4. When it was time to go, anything that would not fit into my 1975 AMC Gremlin could be placed by the dumpster of a dismal, gray apartment complex.

I moved 13 times in six years, including the two times I went home for the summer. There was no garden, no family keepsakes — just me and my reckless decision-making process.

When I got “a real job” it was time to land. A cat found me, I planted some roses and became a receptacle for things my mother had always wanted me to have.

Two (or has it been three) months have gone by and I’m finally feeling “moved in” to my new house.

I knew it was true last weekend when the cactus project was completed.

In July Don Rostimo invited me to visit his cactus garden in the Chapman neighborhood. He was fairly giddy to have a guest to thoroughly appreciate his over-the-top collection of prickly plants.

I have a hard time saying no. Strike that, there’s no reason to say no when free plants are offered.

That day I scored a bucket filled with miscellaneous cacti.

Next, I ran an important information-gathering trip to Claude Geffray’s cactus paradise ( http://creativecacti.com), where I received reassurance that putting cactus in a wheelbarrow was a fabulous idea.

Claude sells much better cactus soil, but she aid I could get by with 60 percent “gritty stuff,” and 40 percent rich garden soil.

Folks, let me tell you, sand weighs a lot.

The sand sat in a wheelbarrow for several weeks while I contemplated options.

Placement of something that requires brute force is not a decision to be made recklessly.

Luckily, cactus doesn’t die when left in a black plastic bucket for more than a month.

Meanwhile, at least two years ago two readers gave me their rusted, rustic wheelbarrows that were gathering more rust in their backyards.

The one I chose for the cactus project already conveniently had holes drilled into the bottom.

Soil recipe: 60-pound bag of sand and about half a bag of decent compost from a big-box store. I’ll ask Claude later about fertilizing tips.

The wheelbarrow isn’t very deep, so I’m wondering whether the cacti will thrive. For now, one drab corner of the new yard looks lived-in.

If I don’t dally before the rain, I might be able to beat the rain and use the other rusted wheelbarrow leaning against the mimosa tree.

The good thing about gathering plants from local friends is you know the plant is capable of survival in this climate. The plants in Ron’s yard were tall and vibrant.

Perhaps in a few years, when these cacti have overgrown their boundaries, I’ll have a few prickly presents for the next guy