Author: Heather Hacking hhacking@chicoer.com @HeatherHacking on Twitter
I’ve been through this before.

A soft soul suddenly drifted into my life and appeared to accept my tentative affection.

The red-tinted tabby kitty was spotted during the heat of the summer, often resting at the base of the mimosa tree. 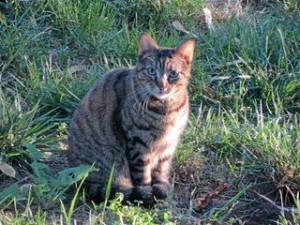 For more than a month, he borrowed my shade as I moved into my new house.

I nicknamed him Ferdinand, knowing that was not a name that would stick if he found a warm spot at the food of my bed.

Ferdinand the bull is a character from a children’s book. The storybook bovine would rather smell flowers and sit under a tree than take part in bullfights.

This kitty would sit at the base of the tree with a distant gaze.

Other times, he was staring intently at the ground. I knew if he started to catch moles I would fall in love — hard.

People have offered me pets over the years. I was tempted by the tales of Portollo in Magalia, a black furball in need of a loving home.

However, I want a cat to “find me.” You can’t just see a picture and trust a matchmaker from the foothills.

Anyone can also pick up a stray at the corner of the alley, take him home then almost immediately begin to feel used.

I want to get to know my future pet slowly — to make sure its a good fit, not just a passing attraction.

Part of my pet reticence stems from a distant heartbreak.

Years ago a gorgeous gray kitty sashayed into my life. I had him fixed, fed him wet food, bought the expensive flea drops for the back of his neck … but he abruptly disappeared.

When my clan scoured the neighborhood we learned he had been nibbling wet food from the hands of residents within a two-block radius.

Long before that I had the long-term feline love of my life.

My cat Hollywood and I stayed together through four household moves, a urinary tract infection, 1996 winter storms and several tumultuous life events.

So the story goes …

Time passed. “Ferdinand” and I began to make eye contract.

Sometimes my beau would come into the kitchen and announced “you have a friend in the yard.”

Over time the cat would let me pet him, at first tentative and later more ardent.

I knew exactly what I was doing when I purchased the small bag of potent-smelling dry nibbles.

“Not that we are going to adopt that kitty,” I said to my beau on a long road trip, “but what would be a good name for him?”

Intermittently, while traveling 600 miles, we came up with two hypothetical names. The name needed to be something that fit the cat’s personality, as well as something that didn’t sound stupid when bellowed at dusk from the back porch.

The conclusion was that we’d wait for the right name.

I was ready to clinch the deal when I bought “cat tuna” from Trader Joe’s.

My beau and I even had the important “relationship talk.” After a lengthy discussion, we decided the cat would be allowed inside the house, but he would not be allowed on the bed.

One gray day it happened. I was ready to grab the cat tuna when I saw the blindingly-white flea collar around the kitty’s neck.

Yes, someone else had moved more quickly. I wished nothing but the best for him. I heard Adele’s voice in my head singing “never mind, I’ll find someone like you.”

This week I heard the neighbor calling “her cat.” Apparently she had named him “kitty.”

When I looked out the bathroom window I saw Ferdinand resting in the quiet under my mimosa tree.

My boyfriend has now forbidden me from opening the cat tuna.

Once a kitty is wearing a collar around its neck, women like me need to know when to back off.