Christmas is a patient holiday, while waiting for daffodils, Nov. 28, 2014

Theoretically, “black Friday” is the official kick-off for the holiday shopping season.

I don’t know who anyone thinks they are kidding. For weeks my Costco shopping experience has included a walk past the $70 ceramic bear holding a candy cane.

In September I bought Christmas slippers.

I could have also purchased a fully-decorated fiber optic Christmas tree. It was conveniently located next to the hanging plastic skeletons in early October.

I know this was not my imagination because I posted a picture on Twitter.

The benefit of having Christmas merchandise on sale after Fourth of July is that it reminds me how much I hate the crowds during the holidays. 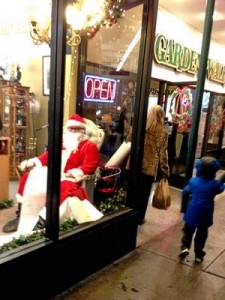 My friend Kara and I attended the Christmas Preview in downtown Chico.

Christmas preview is very much like trick-or-treating. The stores are open for shopping and each store offers a treat.

We even wore costumes. Kara looked adorable in a knitted gray cap that with elephant ears and I donned a green and red scarf with matching ornament earrings.

We arrived promptly at four and were among the first to attack the treat tables.

As is always the case with a good thing, more people arrived.

By about 6 p.m. I felt a mild form of claustrophobia.

I know myself in shopping situations. First I turn cynical, which may or may not grow into general disdain for humanity.

A woman pushing twins in a double-wide stroller stopped every five feet to greet friends. Groups blocked my path while taking group photos.

I bumped into several people who were in mid-text.

In addition to having our fill our Christmas cookies, I wanted to shop at Tom Foolery, where I always find something to buy for my dad.

Kara and I were perusing the collection of old fart gag gifts when two teens elbowed their way through the crowd. Their movements were abrupt and I almost lost some of the Lindt chocolates that were stuffed into my pockets.

I’m sorry, I said, as I was slammed into a little girl who was standing behind us.

“That’s OK,” the little girl said. “We knew it was going to be crowded so we’re OK with being patient.”

Yes indeed. If an 8-year-old had learned how to be patient, maybe I could as well.

The rest of the adventure was joyful. If someone stopped in front of me for no apparent reason, I stopped to listen to Christmas carolers. When four people were in line for the cash register at in Zuchinni and Vine, I snacked on yet another chocolate from my pocket.

With reminders of the upcoming winter holiday spanning half the year, I was reminded in August, September and October to stop procrastinating. When we stopped at the Olive Pit in Corning I bought a few jars for my holiday stash. During the Sierra Oro Farm Trail, I found blood orange infused olive oil for my aunt and uncle at http://www.lodestarfarms.com in Oroville. Honey Run Covered Bridge craft fair: two hand-made gourd ornaments made by Ed and Linda Hemsley, of Oroville. Christmas preview: old fart gag gift for dad and two lovely tiles from Art Etc.

A week before Christmas I’ll head to the farmers market and stock up on dried fruit, bags of apples and mandarins, newly-harvested walnuts and flavored almonds.

Sometimes our greatest of intentions are no match for our deepest desires.

We’re in the middle of a drought, driving dirty cars and carting buckets from the shower to outdoor plants.

Weeks ago a metal rack of spring-blooming bulbs bumped into my shopping cart. Fifty bulbs for $13.

My hesitation was less than momentary because another woman also found herself with her wheels locked.

“Can you believe these are so cheap?” she said.

“But we’re in a drought, are we supposed to be planting bulbs?”

I must have been mumbling, because she didn’t understand what I was talking about.

After my impulse buy, I sought further affirmation in and article in the Sacramento Bee, http://goo.gl/uQqthh.

“People don’t realize it but bulbs are very drought-tolerant,” an expert states.

In fact, they don’t like to sit in water and prefer to be left dry and dormant all summer.

Last summer I planted a few tomatoes in pots, which were a complete disappointment. Those 10-gallon containers were perfect to refill with fresh potting soil and about a dozen bulbs each. At the surface I planted several handfuls of kale and spinach seeds, which are now sprouting after the recent rains. The pots are conveniently located within walking distance of the back door. If I really do this right I can use the water from rinsing vegetables in the kitchen.