By Heather Hacking, Chico Enterprise-Record
12/25/14
For years my driveway has looked like a duck pond the minute it begins to sprinkle. If I had known that all it would take was seven yards of gravel and two half-days of hard labor, I would have hired two men with two shovels long ago. 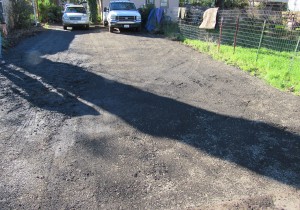 But no. We decided to do some of the heavy lifting ourselves.

The mud hole had been maddening. In the winter we tracked in mud. In the summer we tracked in dust. You could take off your shoes at the door and sweep every day, and still the dust found its way onto the bed pillows. 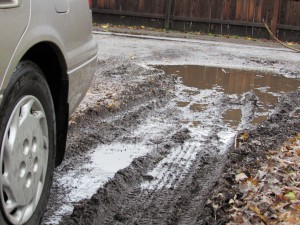 Monday is my day off and the nice young man from Sutherland’s arrived right on time. 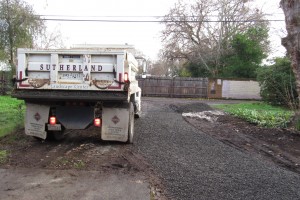 The experience was much like climbing Lassen Peak. When you arrive at the base of the mountain — your rubber chicken in the backpack and oatmeal in your stomach — it’s exciting. Hard work is ahead but the reward (the fantastic view) will become a lifetime memory.

We prepared for the gravel project by clearing away the usual yard obstacles, potted plants and the picnic table.

My partner in grime prepared the soil by filling in gopher holes. Along the main walkways he dug down a few inches so gravel would be packed along the main traffic zones. He looked handsome with sweat on his brow. 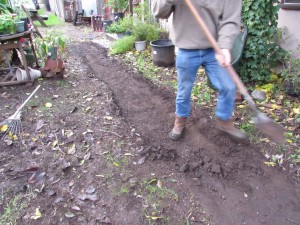 We literally cheered when the bed of the dump truck began to lift and the gravel poured out in a thick sheet, covering the dirt we have known and hated.

Power lines reach from the street to the house, so the disbursement was less than perfect. There would be mounds to move.

But hey, we’re able-bodied and like working side by side. Right?

As luck would have it, the business next door had recently ripped up some concrete, and fist-sized chunks were there for the asking.

We smashed umpteen wheelbarrow loads of concrete into the “lake” until our shoelaces were blackened. 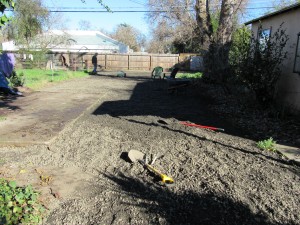 Partway through the day Monday, I remembered that moment on Lassen Peak.

We had paused for a 15-second rest overlooking Lassen Park. My boyfriend urged me not to linger, or I might lose momentum.

I thought the view was just fine from where we were standing, and would have been pleased for the rest of my life to have made it just that far.

For the next half hour we trudged in silence. I hated the dust on my feet. I hated my boyfriend and his long legs and the fact that he wasn’t even breathing hard.

People walked past us with high energy, encouraging us.

An 80-year-old man with two ski poles for walking sticks passed us as I cursed silently.

They were all correct. I was glad we made it to the top.

I took photographs so I never have to do that hike again.

Monday, in the driveway, with half the gravel moved and most of the excitement of the dump truck faded into a distant memory, I remembered Lassen.

My boyfriend and I worked for half an hour in silence.

We did not sing songs nor exchange pleasantries.

But soon, the mounds began to diminish. I texted Lisa and she agreed we could use her hot tub after the work was done.

At the end, my guy became handsome again as he expertly rolled over the finished driveway with a gigantic truck, making the former mud hole look like a bumpy dance floor.