Onions in a trough was the way Tom Orendorff learned to keep gophers at bay. One year he planted 400 onion sets in his yard, and harvested three onions. The gophers don’t bother the tomatoes, he said, but love the onions, Dec. 12, 2014. Heather Hacking — Enterprise-Record 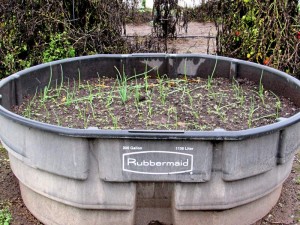 Last December, a day after the “big storm,” I cruised out to the town of Nord. The assignment was to chat with folks who had witnessed water running down their street.

Six homes were flooded in the little town, but not the house of Tom Orendorff, who was nice enough to chat about the near-miss.

One thing led to another, and soon Tom and I were gathering Granny Smith apples from his well-watered back yard.

In some ways, a limited amount of flooding could have been a good thing. His back yard has so many gophers it looks like a prairie dog preserve.

If the gopher holes had been flooded, the intruders might have marched out of their holes, where Tom could have chased after them like a cat.

Near the apple tree, Tom had two large animal troughs filled with soil. 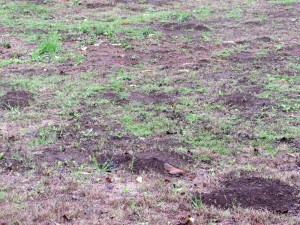 “Onions,” he explained. For some reason the ridiculous amount of gophers in his yard don’t bother the tomatoes, but they gobble the onions. One year he planted about 400 onion starts and harvested three.

I admired Tom for his ability to innovate beyond adversity. A less-dedicated gardener might have moved to a condo with cement walkways and a club house filled with plastic bouquets.

I neglected to ask him why anyone would have need for 400 onions.

Why Tom?
Did an evil sorcerer cast a gopher curse on my new friend? Did prior generations of gophers develop a grudge against Tom?

Why else would gophers have decided to dig holes about every three feet across his great expanse of lawn?

Perhaps Tom is just too kind. Obviously he does not trap nor poison the creatures. Maybe his parcel of land is the only safe gopher ground from the railroad tracks to the highway.

Ideas planted
I did not buy a horse trough that day, but the idea lingered.

My yard is only in the mid-range of gopher devastation.

I also have moles. A week after we made a gravel path from the back gate to the shed, moles began happily pushing up the soil. I stomp on the mounds and make mean noises, but the moles have not yet packed up and moved to Tom’s house.

Last weekend I finally planted some “garlic” in a large plastic pot near the front door.

The garlic was a cluster we bought at the farmers market with good intentions.

They disappeared at the back of the crisper drawer and after an unknown period of time, began to grow. By the time the cloves were rediscovered, two-inch green stems had emerged. The next step in their growth cycle was sitting on the little coffee table near the front door. The logic was that I would remember to plant them if they were within close proximity to my garden clogs.

My plan is not really to grow fabulous garlic cloves. Apparently I’m not really that into fresh garlic, otherwise I would have eaten the cloves before they reclaimed a life of their own.

The idea now is to grow garlic within close proximity to the front door. I can snip off the green tops for salads in summer.

I’m also planting the stubs from green onions. These usually have a quarter-inch of roots at the end and can be planted in the pot like an onion start. If things go well, the onions will grow very large and be used to bonk gophers over the head if there is a flood.

Now that I think about it, maybe that’s why Tom was growing 400 onion plants.

How others grow garlic 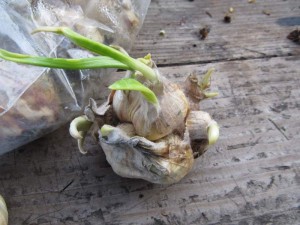 A fairly in-depth article on organicgardening.com, http://goo.gl/4hU83e, notes that garlic is best when planted in the fall. Expect smaller bulbs if you plant in the spring (or January).

About mid June, you might notices “scapes.” If that word is new to you, you’re not alone.

The word is used for the “flowery tops that curl as they mature and ultimately straighten out into long spiky tendrils,” the website states.

To send more energy to the bulb, lop off the scapes and add them to salads or soups.

Once the leaves on your garlic are mostly brown in mid summer, dig them up. Next, hang them for six weeks in the shade. However, my experience is that “new garlic,” is incredibly delicious and best eaten before I forget about it in the back of the crisper drawer.