By Heather Hacking, Chico Enterprise-Record
Next Tuesday will be two weeks that the new kitty has been cooped up in the house.

I discovered that a new way to torture a cat is to let fresh air in through the screen door. The cat will sit at that the screen hoping you are dumb enough to walk outside before nudging her back into darkness.

As the days go on we can tell the cat is getting edgy. She has resorted to batting her fuzzy mouse toy across the hardwood floors. I’m beginning to wonder if there is a an Animal Planet cat curling team. 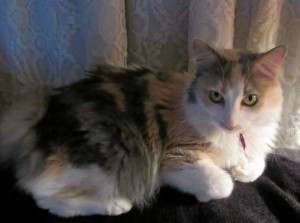 The best way to help her forget about the great outdoors is to place her in my lap and pet her for about four hours.

Meanwhile, we learned that a previous owner must have taught her to talk. Some people think this is cute, but I find it unecessary.

I know what she wants. She wants wet food.

The direct correlation between cat talk and the operation of a can opener has been well documented.

Meanwhile the cat is new and I’m new in love. When I’m at work I think about her.

If I am still at the office I’ll call my boyfriend if I know he’s already home.

“She’s sitting at the top of her cat tower, watching squirrels and moaning.”

Sometimes he’ll send me photos on my cellphone.

Before the cat moved in, most of the tables held glass spaghetti jars filled with water and plants.

While cooped up inside, the new cat has taken the liberty of adding the jars to her drinking water options.

My goal is to grow long, luxurious greenery that will drape precariously around the room on pushpins — Repunzels of philodendrons and the most wandering of Tradescantia flumeninsis.

Both of these are on the kitty poison list. We also have toxic Pathos and a fern we found in the center of the table at the Butte County Rice Growers Association annual dinner.

Just to be certain of my fears, I looked up the lists of deadliest house plants on the Better Homes and Gardens website, goo.gl/4Ckc9j. The list includes daffodils, something called “dumb cane,” Easter lily, English Ivy, oleander, peace lily, sago palm and the ZZ plant.

The ASPCA website goo.gl/tFpxY2 includes hundreds more, including pretty much everything that I grow in my garden.

This brought me to the conclusion that cats must be smart, otherwise they would be extinct.

The symptoms from toxic plant eating include diarrea, vomiting, skin scratchiness and “depression,” among others.

PetMd clarifies that eating grass outdoors is more than just common, it may even be necessary: goo.gl/z3NQ1v

When cats get an upset stomach, they want to throw up, and eating grass can help. PetMD also says kitties need folic acid, which is contained in plants, or need grass as a laxative for moving massive amounts of hair from mouth to their tail.