Handfuls of kale can be turned into a smoothie. Heather Hacking — Enteprise-Record
Not too long ago I would never have thought about eating kale. In my mind, kale wasn’t a food, it was a food accessory. Kale was something you found at the side of an omelette — the same as curly parsley or a warm slice of orange.

My first job was in Benicia at the Foster’s Freeze. Part of my job was to stock the salad bar.

Kale was used to cover the ice between salad bar containers. As we closed the restaurant, we washed off the dabs of macaroni salad and spilled dressing and used the kale the next day. 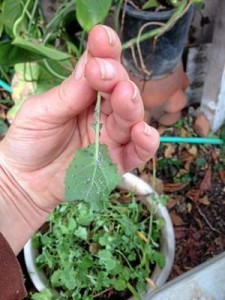 The kale I knew had leaves so stiff you could use it for roofing material in a primitive village.

A few decades ago I discovered kale as a winter ornamental. The bushy, magenta and dark jade leaves looked pretty during the cold months.

Yet, I gave up on kale as a garden ornamental because it became the happy hangout for slugs. I yanked the plant when I suspected it was actually a place where slugs were breeding. 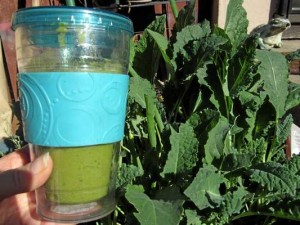 Today, kale is all the rage. Society has been educated that if you pick the leaves when they are young, the plant is actually edible.

Somehow the nutrition of kale is also part of the collective consciousness.

Perhaps there was a successful kale public relations campaign. This preceded the printing of T-shirts that read: “Eat more kale.”

I checked Web MD, http://goo.gl/GSnRdp, which states the green stuff contains protein, fiber and nutrients helpful for vision. It also contains Vitamin K, a vitamin nobody knew they needed until kale became popular.

Because of the drought, I’m still not sure if I’ll have a real garden this year. In the meantime, I planted dozens of daffodils in pots. There was room in these pots for kale seeds, which I planted well before the flowers bloomed. More seeds were planted several weeks later.

My thought was that by the time the daffodils had bloomed and faded, it would be too warm for more kale.

This worked really, really well. When the individual leaves were picked from the kale, these baby kale plants grew more. For weeks and weeks I’ve been harvesting handfuls for salads and smoothies.

Somewhere along this kale journey I noticed a few holes in the leaves. I thought earwigs were nibbling at night. I washed the leaves and figured a bit of earwig spittle wouldn’t kill me.

I found a caterpillar by chance, ; It was the exact same color as the leaves it had just eaten.

The next day I killed a small, medium and large caterpillar, and now knew the source of the holes in the leaves.

Now I was on a mission of destruction.

Soon I found the cute, yet difficult to spot eggs. These were easy to smash between the leaves. However, even with time on my hands the egg-hunt became time consuming.

A few days later and there were so many bugs I grabbed the leaves by the fistful and shoved them into a coffee can filled with soapy water.

It wasn’t too difficult to be a plant detective. The University of California Integrated Pest Management website, http://goo.gl/18eSLD, has photos of critters similar to those found in my kale patch: cabbage loopers.

Kale is related to cabbage, you see.

Now that I know, the season for kale is over. It’s all good. It’s time to let the daffodil bulbs dry, and perhaps use the pots for some summer color. I’m thinking zinnias grown from seed.