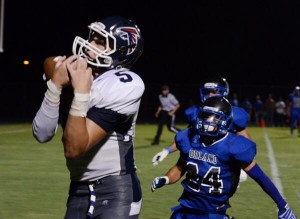 The fast-paced offense the Falcons implemented this offseason was working well with running back Connor Silveria brushing off initial contact and picking up chunks of yardage and quarterback Timmy Naylor having the composure and quick feet to improvise his way for third-down conversions.

Central Valley’s Connor Silveria loses his helmet but gains a touchdown for the Falcons. Silveria ran for 101 yards on 17 carries in the first half alone, adding a pair of touchdowns, including this one. He finished with nearly 200 yards rushing in the 21-19 win. (Jason Halley/Enterprise-Record)

“They hit us in the mouth first,” said Orland’s Kavi Ram, who had more than a 100 yards receiving and the Trojans’ final score, a 17-yard TD reception.

But the unsung heroes – besides Falcons’ kicker Jesus Guiterrez for being a perfect 3 of 3 on extra points – was the defensive front of CV, which blocked a field goal, an extra point, stuffed what would have been a tying 2-point conversion midway through the fourth quarter and stifled Orland’s run game most of the night.

Orland quarterback Tyler Batchelder finished with 53 yards rushing on 19 carries. Fullback Arthur Flynn had 65 yards on 10 carries with 20 yards coming on his first of two TD runs. Still, that was a far cry from what the Trojans would like to do on the ground.

Defensive coordinator Matt Diskin and coach Matt Hunsaker said that was the plan: to make Orland throw the ball. They just didn’t think the Trojans would fare so well at it. The coaches also likely hadn’t planned on four fumbles of their own, three of them coming after CV took a 21-0 lead that almost provided Orland the means to an unthinkable victory for much of the night.

Despite the fumbles, the Falcons’ head coach seemed pleased with Silveria, who he called “a real workhorse,” and his offensive crew.

Hunsaker was complimentary of Timmy Naylor, talking about what Naylor was able to do even though he missed basically the entire offseason because of labrum surgery.

If CV can even remain healthy with its game at Enterprise next week and a road trip to Chico, the Division II title chase just became much more interesting as the Falcons could crash the presumptive party of a West Valley-Sutter rematch of last year’s final.

Sports Writer for the Chico Enterprise-Record and Oroville Mercury-Register. Contact me at jshufelberger@chicoer.com or (530) 896-7774. Note, I am out of the office twice a week (generally Sundays and Mondays) and sometimes out on assignment so I may not get back to you right away.
View all posts by Joseph Shufelberger →
This entry was posted in Uncategorized and tagged Central Valley football, Connor Silveria, Jesus Guiterrez, Matt Diskin, Northern Section Division II football, Orland footballl, Timmy Naylor. Bookmark the permalink.